So now the Oscars are in the hands of one of the judges on “So You Can Think You Can Dance,” and a former studio head who once told PBS, “sometimes your job is to be stupid.”

What’s that going to mean for next March’s Oscar show?

(To be fair, Adam Shankman has done considerably more than just judge TV dancers, and Bill Mechanic has said plenty of other things and shown himself not to be stupid over a lengthy Hollywood career.)

The appointment of Mechanic and Shankman certainly means that AMPAS president Tom Sherak and the board of governors want to see the same kind of show they saw earlier this year, when Oscar neophytes Bill Condon and Lawrence Mark tackled the job. (Photo, below: Darren Decker/AMPAS) 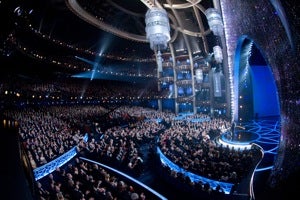 It means more singing and dancing, obviously. It means one producer to handle the serious, film-history part of the evening, the usual Oscar gravitas, and another to focus on giving ‘em the old razzle-dazzle.

It means that Rob Marshall’s “Nine,” if it finds itself among the nominees, should feel right at home.

And the press release in which AMPAS president Tom Sherak cited Shankman’s experience in a variety of fields but “especially choreography,” means the Oscar producer will have a skill set not needed in that job since Stanley Donen produced the show more than 20 years ago. Since then, producers have generally hired the likes of Debbie Allen, Paula Abdul, Stomp, Daniel Ezralow and Michael Flatley to handle that department, not always with the most felicitious results.

Mechanic’s appointment, on the other hand, tones down the glitz factor enough to make the Academy feel more comfortable, even as it opens the show up for an unusual conflict-of-interest: As an executive producer of the animated-feature candidate “Coraline,” Mechanic may end up as one of the few Oscar producers to have a movie in contention on the show he produces.

(The two times Laura Ziskin produced the show, she did not have a “Spider-Man” movie in the race; Joe Roth, when he produced the show in 2004, used to joke about how the slate of films that his Revolution Studios had released were distinctly non-Oscar material.)

The question now is whether the choice of host will fall toward the Shankman side of the scale (i.e., a showman like Hugh Jackman) or the Mechanic side (a star who’s not necessarily from the musical theater realm).

Clearly, Jackman is the kind of host who would fit Shankman’s sensibility if he were inclined to return.  (Opinions differ on whether he is.)  But Steve Martin showed some dance moves in "Pennies from Heaven" way back when — and John Travolta, Shankman’s leading man in "Hairspray," is certainly known for his fancy footwork.

On the other hand, “Hairspray” was Shankman’s film version of the stage musical composed by Marc Shaiman, who has a long history of close collaboration with one of the most beloved (and frequent) Oscar hosts in the show’s history. There are rumors out there …