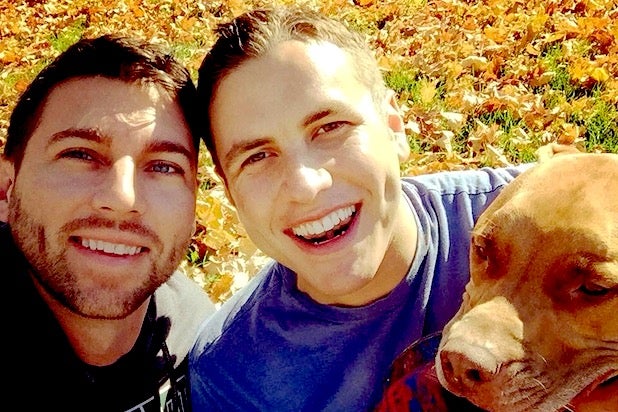 The Chicago gay couple — Jared Milrad, 31, and Nate Johnson, 30 — featured in Clinton’s “Getting Started” announcement marked the first time ever that a same-sex couple appeared in an official presidential campaign video.

TheWrap spoke with the history-making couple about how their participation in the video came about, the subsequent media blitz and whether or not the former Secretary of State RSVP’d to their upcoming wedding.

“We were just thrilled to be able to positively represent the community,” Milrad told TheWrap. “It’s been amazing! We’ve heard from LGBT people from as far as the Ukraine, Mexico, Brazil, all around the world.”

From the moment the video was uploaded to the web, Milrad and Johnson’s phone was ringing off the hook. Soon, the two were being interviewed by MSNBC, Nightly News, Time and The Times of London.

What makes this story even more fascinating is the fact that they had no idea they were going to be included in the actual announcement.

Milrad, a lawyer and non-profit founder, and Johnson, a health care consultant, were told they were appearing in a video for Clinton, but no one mentioned it was going to be the video.

“We were shopping for some stationary and clothes for the wedding, trying things on when we started getting text messages that the video had been released,” said Milrad. “So we basically ended the shopping excursion, went to the car, and watched the video in the parking lot.”

TheWrap: How did Hillary’s people find you?
Jared Milrad: One of our mutual friends, who is sort of involved with Democratic politics here in Chicago, connected us with some videographers who told us they were doing some “field pieces” about people going through some life changes. She knew that we were getting married this summer and we were planning for that so she connected us.

Were you supporters of Hillary before you shot the video?
Nate Johnson: We were both supporters before she officially announced. I was a supporter since 2008 primaries. Obviously once the president won the nomination for the Democratic primary, I of course supported him in the general election. But I was a Hillary supporter from the beginning. Jared was an Obama supporter. He volunteered for the Obama campaign in 2008.

You ended up making history as the first gay couple to be featured in a presidential video announcement. What was that like?
Johnson: We feel just enthralled that we are in some respects representatives of the LGBT community and that this is the first time in a major presidential campaign video, that a gay couple was featured.

Also Read: I Won’t Vote For Hillary Just Because She’s Running and Female

You then invited Hillary to your wedding. Did she RSVP yet?
Johnson: Jared tweeted out an invitation. We extended a ‘plus one’ invitation to her so she’s free to bring any guest that she pleases. The campaign manager did call us and tell us they were very happy we extended the invitation to her. No official word yet on whether she’ll come or not but we’re saving her a spot. We know she’s incredibly busy right now.

Thanks for inviting us to your big day @HillaryClinton. We're returning the favor & inviting you to ours. #wedding pic.twitter.com/paMtBFLLUW