For many years, Gordon Willis was the guy who was thanked from the stage of the Oscar show, but overlooked in the nominations.

And he never got a nomination, even as he was lauded on Oscar night by the likes of supporting-actor winner John Houseman, who said that Willis’ camera work “did a great deal to create the character of Kingsfield” in 1973’s “The Paper Chase.” 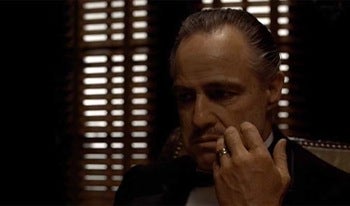 Finally, when Willis wasn’t nominated for the luminous look of Woody Allen’s “Manhattan” in 1979, the outcry became deafening: the omission was “a crime,” said fellow cinematographer Caleb Deschanel, whose failure to be nominated that same year for “The Black Stallion” also raised eyebrows.

“Maybe if I bought a house in Hollywood I’d have a better chance,” shrugged Willis.

When Willis was finally nominated, for Woody Allen’s “Zelig,” Allen told writer Eric Lax that the recognition was laughable. “He’s revolutionized the industry on twenty other pictures and went unrecognized,” Allen said. “Whereas his work on ‘Zelig’ was great as always, but it was not nearly as complex as many of my films.”

Willis later received a second nomination for the third (and let’s face it, the least) of the “Godfather” films. But now, 30 years after Caleb Deschanel decried his snub as a crime, Deschanel himself is a member of the Academy’s board of governors, where he had the ability to do something about that crime by helping vote Willis an honorary award.

One of a handful of cinematographers to receive an honorary Oscar, Willis was in a way born into the movie business; his father was a makeup artist for Warner Bros. during the 1930s.  He was assigned to the motion picture unit in the Air Force during the Korean War, then left the service and began shooting commercials in the 1950s, graduating to features in the following decade.

At the Governors Awards ceremony on November 14, you can expect to hear talk of Willis’ groundbreaking use of lighting on films like “The Godfather” (above; Paramount Pictures), where he deliberately kept Marlon Brando’s face in shadow by lighting him from above.

This flew in the face of conventional wisdom, which called for bright lighting – “I’d always hear, they have to be able to see it at the drive-ins,” Willis once said – but his style made him the most influential cinematographer of the era, and won him the nickname “the prince of darkness.”

“I think that he’s single-handedly responsible for the respect and acknowledgement that cinematographers now have,” said John Bailey in the 1986 book “Masters of Light: Conversations with Contemporary Cinematographers,” by Dennis Schaefer and Larry Salvato.

He also acquired a reputation for being obsessive (he and Coppola repeatedly clashed on “The Godfather”). But Willis tended to work with top directors over and over – he made eight movies with Woody Allen, three with Coppola, six with Alan Pakula – even though he could be a demanding collaborator.

“Everything happens on the set the way Willis wants it to happen,” an anonymous cinematographer told Schaefer and Salvato. “That’s power.”