Well, here’s where I come in.

This was supposed to be my inaugural post, before yesterday’s best-picture news intruded.  So, a day late, welcome to The Odds, a six-month excursion into the heart of all things Oscar. I suppose an introduction is in order.

I’ve been doing this for a while. I came to the Oscars a little late, after about a dozen years writing about rock ‘n’ roll, but by now I’ve been to 17 Oscar shows. One in the audience, two in the pressroom, and 14 backstage. 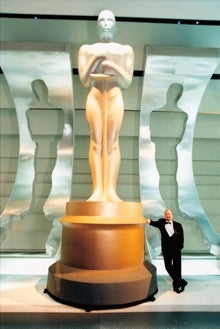 I was once trapped in a stairwell at the Dorothy Chandler Pavilion with an Oscar-toting Bruce Springsteen. That was pretty cool.

I once stepped on Meryl Streep’s dress outside the green room at the Kodak Theater, which wasn’t so cool. Except that it’s pretty damn impressive when the Greatest Actress of Her Generation stands a foot away from you and hisses “You’re standing on my dress!” in a tone that clearly means “I’m exaggerating my anger for comic effect, but you’d better move NOW or face my true wrath.”

For the last four years, I’ve seen every nominated film in every category (including foreign, docs, shorts…) before the Oscar show. Sometimes that felt like a lot of work. I don’t know that I can forgive the Academy’s makeup branch for nominating Norbit … or, for that matter, the music branch for giving a nod to a song from August Rush.

My Oscar book, The Big Show, made the bestseller list in 2005 for precisely one week, where I sat two slots below Bob Dylan and two slots above the Dalai Lama. I wish the book sold more, but I liked the company.

I believe that the Oscars, like Walt Whitman, are large. They contain multitudes.

I think the Oscar show is a circus, a mess, a free-for-all, a reality show with enough ego and silliness to put Kate and Jon to shame. Among many other things. Somewhere in there, it also has to do with good movies.

I think that we sometimes expect it to be all things to all people. We ask the show to honor the best movies, not ignore the blockbusters, pay attention to the indies, entertain viewers, move quickly, respect all the nominees but get the boring ones offstage quickly … and, by the way, get huge ratings so that ABC and AMPAS can make lots of money.

Face it: It can never do all that stuff.

Even with 10 best picture nominations, it can never do all that stuff.

And while we’re on that subject, I think that expanding to 10 best picture nominations was a gamble that might have been worth taking, and one that has a chance of reinvigorating the race.

But if I had to guess, I’d say that for the next few years, those extra five nominees will go to the same kind of small movies that usually get the first five nominations: The Wrestler, not The Dark Knight.  Not the kind that will goose the ratings.

And if I had to guess, I’d say that in about five years or so, the Academy will go back to the old slate of five best picture nominees.

I believe that Academy voters have irrational prejudices, blind spots and occasionally infuriating ideas about what constitutes quality. Just like the rest of us.

I think they often give awards to the wrong movies. And I think that for the most part, they do so in the genuine belief that they are voting for the best achievement. Though I’m not sure this makes it any easier to swallow when they name Roberto Benigni best actor.

My favorite movies are usually not nominated for best picture. In recent years, for instance: I’m Not There, Once, The Lives of Others, Children of Men, The New World. I try not to hold this against voters.

My favorites so far this year are An Education, The Hurt Locker and It Might Get Loud. I’d love for the first to get a best picture nomination, but I’m not confident it will. The second had better. And I know the third won’t.

I hate that Oscar blogging too often turns into a big game of who can guess the most winners.  But, you know, guessing can be fun.

My Oscar guesses are usually on the conservative side, and usually accurate enough to score near but not at the top of most pools. Except for two years ago, when I really sucked.

I made up for that last year by correctly picking 22 out of 24 winners. But you’ll have to take my family’s word for it, sad to say, because I didn’t post those picks anywhere.

I do not approach the Oscars from a default position of cynicism, though sometimes I think I should.

I don’t really care Who You Are Wearing, except when I’m backstage and Julia Roberts walks by in a vintage Valentino, or Daniel Craig comes down the hallway at rehearsal in a immaculate gray Tom Ford suit and my photographer whispers “man crush.” Then I find that I care. A little.

Finally, I think that if you can’t take the Oscars seriously, writing about them would feel like nothing but trivia and gossip and nonsense.

And if you can’t have fun with the Oscars, writing about them would be just plain unbearable.