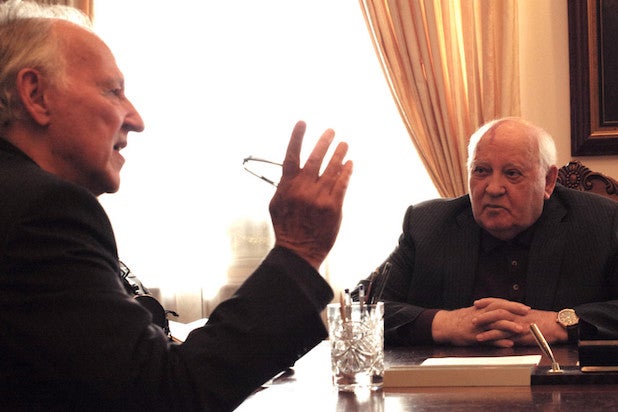 As one watches Werner Herzog and André Singer’s documentary “Meeting Gorbachev,” the mind floats back to the words of the late Gene Siskel, the film critic who was known for, amongst other things, a hypothetical question he posed to filmmakers: “Is my film more interesting than a documentary of the same actors having lunch together?”

“Meeting Gorbachev” is a film about Werner Herzog and Mikhail Gorbachev, the last president of the Soviet Union, having a series of three conversations, including one during which they enjoy fancy chocolates. It’s a conversation so deeply fascinating that there’s nothing else the filmmakers could have done to spice it up. Herzog and Gorbachev could have joined forces to halt an alien invasion and invent time travel, and it still wouldn’t have packed the same wallop.

Herzog narrates “Meeting Gorbachev,” which intercuts his interviews with documentary footage and historical context. If you knew little or nothing about Gorbachev, the information is vital and humane, and sometimes comical. We witness the young life of Gorbachev as he grows from a poor farmer to a powerful political force. He ascended to the highest office in the land in the 1980s, after a morbidly absurd number of leaders died before him.

What followed was an unprecedented era in Russian history, as Gorbachev reached out to the west and helped bring an end to the Cold War. Gorbachev tells Herzog that he wanted “more democracy,” before adding — with perfect comic timing — “I also wanted more socialism.”

Few documentarians have mastered the interview process like Werner Herzog, who playfully pulls his subjects outside their comfort zone with unexpected poetic insights and unusual observations. He opens his interview with Gorbachev, who was a teenager during World War II, by joking that “the first German you met probably wanted to kill you.” He’s surprised to discover that not only was that not true, but Gorbachev’s real first experience with Germans was charming and, since candy was involved, delicious.

Gorbachev’s ability to ingratiate himself beyond all expectations was instrumental to the sweeping political change he helped profligate in the 1980s and 1990s, a journey that Herzog and Singer outline in succinct detail. But they don’t get lost in the nuts and bolts. It’s easy now, decades later, to think of Gorbachev as a historical figure. “Meeting Gorbachev” isn’t about educating audiences on Gorbachev’s life — it’s too fawning to be credible as an objective document — it’s about meeting Gorbachev. Sitting in the same room, getting to know him, and illuminating his humanity while the 88-year-old politician is still around to show it.

And although “Meeting Gorbachev” does an excellent job of making the world-changing leader seem like a warm human being, fond of poetry and chocolate and deeply mourning the loss of his late wife, there are moments of resentment that seep in, and moments of bleak humor. Reflecting on the aftermath of his presidency, where power was seized and Russia turned away from Gorbachev’s political agenda, the ex-President admits he regrets “not sending [Boris] Yeltsin off somewhere.”

Though clearly entrenched in the past, any look at our political history is bound to in some way reflect on the present. Gorbachev’s condemnation of “reckless politicians” seems particularly pointed, and his declaration that “people who don’t understand disarmament and cooperation should [not be in] politics” is bound to a elicit a response from certain members of the audience, who no doubt have similar leanings in these comparable times.

“Meeting Gorbachev” only dips its toe into the waters of topicality. A few parallels here, a pointed remark there. The most glaring image of the whole film is at the funeral for Gorbachev’s wife, Raisa Gorbacheva, when a young Vladimir Putin can be seen looming over her open casket. Nothing is said of this moment, nothing pointed follows, and very little is said of Putin’s regime. There’s an elephant in the room, and we cut away before the stampede.

“Meeting Gorbachev” was brought to you by the History channel, and cinematically it has a made-for-television vibe. No doubt many audience members will find themselves nostalgic for watching cable on a Sunday afternoon with their dads. The footage, some of it from previous documentaries, is presented mostly as matter-of-fact, although the filmmakers can’t seem to resist a few cinematic gags, like floating the camera around a statue of Gorbachev at pivotal moments in a speech.

The real show here is Herzog and Gorbachev, two of the most interesting people in the world, getting to know each other, asking the big questions, fumbling through small talk, and becoming friends. You may already know everything there is to know about Mikhail Gorbachev. But you’ve probably never sat down with him for hours on end, and you’ve probably never empathized with him so much that you cried. For that you have this movie, and what a fascinating movie it is.