For his new yet familiarly expansive contemplation of life’s transitions and the dynamics of love, Spanish director Fernando Trueba (“Belle Epoque”) introduces a simple but effective visual proposition that toys with the way we conventionally understand time in cinema.

In “Memories of My Father,” adapted from Colombian author Héctor Abad Faciolince’s autobiographical novel “Forgotten We Will Be” (El olvido que seremos), the past, set during the early 1970s, is presented in color, while the story’s present, 1983, appears in black-and-white. Bygone days, evidently, were the happiest and brightest for the central family.

Adored by students and locals in the city of Medellín, doctor and professor Héctor Abad Gómez, played by seasoned Spanish actor Javier Cámara (“Talk to Her”), walks tall as a beacon of disinterested kindness and dedication to the collective well-being. His wife Cecilia (Patricia Tamayo), however, wishes he cared more about their financial stability.

Through the eyes of his young son Quiquin (Nicolás Reyes Cano), the only boy among six children, we witness glimpses of all the people Héctor has helped: a woman in need of a prosthetic leg or a young man from a disadvantaged background whom he put through college. Each father-son interaction over the years carries with it a lesson on how to treat others and on doing the right thing, even if it one’s actions go unrecognized. “Heroes don’t boast,” he tells the kid, after testing a life-saving vaccine on him. 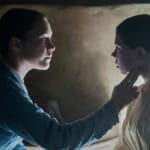 Also Read:
‘The Wonder’ Review: Florence Pugh Stuns as a Woman of Science in a Community of Faith

Interestingly, one of Trueba’s recurrent points in this interpretation of the lauded book is how the patriarch ensures his clan, particularly Quiquin, understands their privilege. At one point, the incessantly cheeky boy asks his parents if they are rich, to which his mother stumbles to say they are simply “well off.” But by then, the doctor has already instilled the basis of class consciousness in him by way of shocking visits to see marginalized children who perish because they lack basic necessities and access to public health services.

But while Trueba’s tried skill set in working with actors and his handling of the tone never allows “Memories” to head into unpalatable, saccharine territory, there’s no denying the portrayal of the revered man doesn’t much include any darker, unflattering shades. Héctor’s nearly flawless worldview and irreproachable actions are questioned only once by adult Quiquin (Juan Pablo Urrego), who implies his seemingly selfless deeds enlarge his ego.

Over the course of the time we spend wandering the house and the city with Quiquin, Trueba demonstrates that the moments he selected to focus on eventually string together larger ideas. For example, young Quiquin’s juvenile desire to see a dead body, which he voices constantly, eventually (many minutes later) yields a potent reflection on the ephemeral nature of existence. That’s when the movie is at its best, because it rewards our patience as it tries to set up all of its multiple philosophical threads in the first act.

One of Almodóvar’s recurrent stars, Cámara does his best Colombian accent, specifically from this region, which for the most part tricks our ear (with a few exceptions in which his Castilian lisp sneaks through). The actor’s performance here, one of gentleness and conviction in the face of impending violence, is reminiscent of his role as a noble teacher in “Living Is Easy with Eyes Closed,” a period piece coincidentally directed by the other Trueba brother, David. 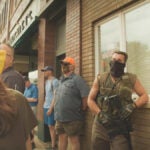 Whether or not Héctor sought martyrdom — a claim that can be made when he decides to run for office amid numerous assassinations and terrorist attacks against intellectuals in the country — his distance from the dogma of religion makes a strong impression. As Catholicism demands obedience and bargains in guilt and shame, the father’s greatest example, at least as it concerns the film, is that doing good often means defying the status quo.

One can glean from the collection of instances that one of Héctor’s most pressing concerns was his inability to create a boundary that enabled him to concentrate on the issues within his household rather than solving those afflicting the population at large. Trueba marvelously exemplifies this conflicted dichotomy without pointed dialogue.

Halfway through the recollections of the past, the father sits in his parked car with his two youngest children to explain to them the terrible news of one of their older siblings falling ill. Meanwhile, outside the car, chaos takes over the streets in the aftermath of the explosion of a bomb. In the same frame, personal and communal drama coexist. 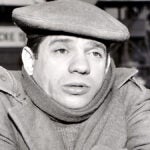 The director sets his gaze on the more intimate of the two, as for once Héctor chooses to ignore the noise beyond his vehicle. As we all do in life, our immediate pains outweigh our understanding of the bigger picture. The same can be said of how Quiquin, who will eventually write these recollections on the page, sees his father. The heroic feats dad performed for others meant less than those that directly impacted him and his loved ones.

Elegantly traditional in the way that Colombian cinematographer Sergio Iván Castaño’s frames look, with warm colors that evoke nostalgia in the past and harsher shadows for the increasingly frightening present, “Memories” plays like a crowd-pleasing, heart-rending international title that appeals to older audiences who still regularly visit arthouse theaters. Trueba excels at those well-meaning, exquisitely realized, vividly acted human dramas. “Memories” translates those sensibilities to South America, and even if the product can’t exactly be seen as rousing, one can’t entirely resist its affecting charm.