If summer is a time for big-budget extravaganzas chock full of movie stars, “Men Go to Battle” might be the ultimate counter-programming: a tiny indie about two brothers in Kentucky struggling with different ideas about what to do with the inhospitable plot of land they’d been bequeathed.

But “Men Go to Battle,” from first-time director Zachary Treitz, is an anomaly in the extra-low-budget indie world, too, because it’s a period piece that goes to great pains to recreate the first years of the Civil War. The idea, said Treitz of the film that premiered at last year’s Tribeca Film Festival and opens in a limited engagement in Los Angeles on Friday, was “to make something that was wildly beyond our means with a small group of people and a small amount of money.”

Intimate, raw and surprisingly adept at capturing a period and scale the filmmakers shouldn’t have been able to achieve, “Men Go to Battle” is also strangely timely: Considering that big money and the deep divisions in our country are hot topics on the campaign trail, it might be an appropriate time to check out a cheaply made indie about an era of even deeper divisions.

Also Read: 'Free State of Jones' Feels Like 'Cramming for a History Exam at 2 AM' and 8 Other Merciless Reviews

TheWrap spoke to writer-director Treitz and writer-actress Kate Lyn Sheil (better known as an actress who’s been in “House of Cards” and “The Girlfriend Experience” and made a splash at Sundance this year with “Kate Plays Christine”) after their film premiered at Tribeca. 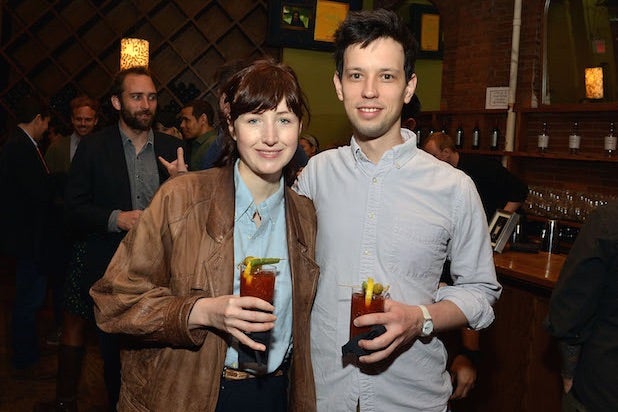 THEWRAP: How resourceful do you have to be to make a Civil War period piece on a tiny budget?
ZACHARY TREITZ: That was a lot of the fun of the challenge of making a DIY period piece, theoretically. We thought it would force us to make interesting choices. But we didn’t know how hard that would be, and how brutal it would be.

So how hard and brutal was it?
KATE LYN SHEIL: Well, we shot piecemeal over the course of a year, which allowed us to regroup after every shoot and figure out what was working and what wasn’t. And then we shot battle reenactments documentary style, which took a great deal of convincing — but once we were in we had lot of access and were able to get a lot of footage.

How did you get the access?
TREITZ: It took months of convincing, trying to get into the hermetically sealed world. Rightly so. They’re closed off, because they don’t want interlopers.

You couldn’t have staged big battles on your own, could you?
SHEIL: No, no.

TREITZ: The main thing was, we couldn’t stage marching with 1,000 people. How would we do that? Special effects weren’t going to do that, with our budget.

But we got lucky in the timing, in that it was the 150-year anniversary of a lot of these battles, including the most important battle in the movie, and there were thousands of re-enactors coming from all over the country. That was actually our first shoot. Kate and I and our actors drove down and dressed ourselves in the period costumes because we didn’t want to stand out.

SHEIL: They wouldn’t let us stand out.

TREITZ: We probably looked a little goofy, but Tim [actor Timothy Morton] looked good, and everybody else we were photographing looked good. And so we just started creating scenes that we knew we wanted. We’d say to one of the re-enactors, “Hey, can you come over here and say this thing for a minute?”

The re-enactors understood more and more as the weekend went along that we weren’t there to exploit them or make judgments or distract then. We didn’t want to draw attention to ourselves, we just wanted to be flies on the wall — flies with a huge burlap sack with a camera in it following our main actor.

But it must have been tricky to re-create the rest of that world, too.
TREITZ: Kate and I wrote the movie together, and we also did the research and the location scouting and casting together. We just assumed that these old buildings would be out there. I’m from Kentucky, I thought, “I’ve seen this stuff, I’m sure it will work out, let’s just drive around.”

And we drove around for months and months and came up with nothing. Every time somebody said, “Oh, there’s an old church 17 miles down that road, you just gotta cross a small riverbed,” we’d get there and it would turn out to be falling down and totally unsafe to shoot in.

SHEIL: And also, everything in the movie was supposed to look like it had just been built in the ’20s or ’30s or ’40s.

TREITZ: The background was that these people had built this community over the last 50, 60 years. And the buildings shouldn’t look like they were 150 years old.

SHEIL: A great deal of luck was involved, too. Eventually, we were two or three weeks out from our first large shoot. We were doing scenes at a cabin where our characters lived, and we still hadn’t found the cabin. Our producer was like, “If we don’t find it in the next two days, we can’t do this.” But a friend of his was in town and wanted to go on this organized nature walk on a farm 15 minutes outside of Louisville, where our home base was. And he called us and said, “I just stumbled on this stone cabin that’s absolutely unreal.”

TREITZ: And we were like, “Excuse us, but we’ve been driving around this state for six months, and we would appreciate it if you wouldn’t call us with your little cabin.” And then we went out and saw it and said, “OK.”

SHEIL: It was perfect.

TREITZ: But the problem was that then we realized, “Oh yeah, but it has a huge ’70s porch and a plastic roof and it’s disintegrating inside.” So then we went to our art department, friends of ours who’d never worked on a feature film before, and said, “All right, you’ll just take that ’70s porch off, and put up a cedar roof, and then plaster the inside, and it’d be great if you could also make a garden. We’ve got about five, six days to do that.”

And they were like, “OK, cool, we’ll just never sleep again.”

Good thing they were your friends, I suppose.
TREITZ: That was the challenge — making something really big with a small group of friends who all knew each other, so we could push each other a little further than we should have, and create something that, whether it’s good or bad, was unbelievable to us that we could pull it all together.

You mentioned that it was the 150th anniversary of a certain Civil War battle that’s depicted in the movie. Why did you want to be so specific, when you’re not dealing with well-known battles?
TREITZ: We wanted to be hyper-literal with the specific locations and time, this rural part of Kentucky in 1861 and 1862. The clothes that they wear, the buildings they’re in, the music they listen to — we wanted it to be so specific and local to that time and place that it was almost abstract, in a way.

You didn’t have the familiar markers of, “Well this is that piece of history.” It would be completely immersive and you’d be lost in something. We weren’t trying to re-contextualize something you’d already heard about. We wanted to create something new that happened to be 150 years old.

SHEIL: It was important to us that this was a very small, specific story. And we didn’t want to fetishize any of the historical details, we just wanted to let the story be very much situated inside of them.

TREITZ: We kept saying, “How do we make a movie that’s a period piece that feels like it’s now?”