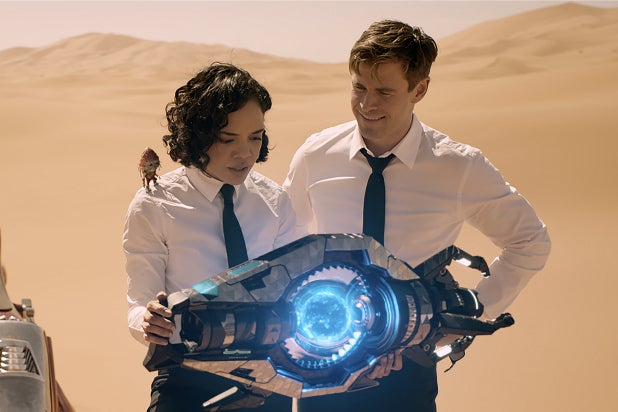 Here come the Men in Black, but not the ones that you remember. F. Gary Gray’s “Men in Black: International,” a sequel/spin-off to the blockbuster franchise about human bureaucrats managing interstellar immigration services on Earth, has a whole new cast, a whole new style — and no new ideas.

Barry Sonnenfeld’s original 1997 adaptation of the Malibu Comics series “Men in Black” was one of the most unexpected blockbusters of the 1990s. Half the movie was straightforward exposition, but it was funny exposition so nobody cared. Eccentric and clever, and steadfastly refusing to indulge in an action sequence whenever a quirky conversation would do, the film was a rare beacon of wit in a wasteland of otherwise brainless spectacles.

But after two sequels, the “Men in Black” franchise never quite evolved (unless you count the animated series, which the movies never seem to). What started out as a pointed metaphor for America as a melting pot of disparate cultures became a limp star vehicle for Will Smith and Tommy Lee Jones, and later a mediocre star vehicle for Will Smith and Josh Brolin (playing a younger version of the Tommy Lee Jones character). The seemingly limitless supply of timeless and topical material that was teased in the original film ran dry. Almost immediately.

Which brings us back to “Men in Black: International,” a lighter-than-air new entry in the series. Tessa Thompson and Chris Hemsworth, reunited after “Thor: Ragnarok” and “Avengers: Endgame,” are Agents M and H, and they’ll have to get over their conflicting personalities to find a mysterious alien device which could threaten the universe.

Gone is the social commentary — you know, “the point” — and in its place is globetrotting sci-fi super spy adventure, empty but entertaining, and carried almost exclusively on the multimillion-dollar charms of its stars.

Thompson plays Molly. The Men in Black erased her family’s memories after an alien encounter, but not hers, so she’s spent her entire life trying to find the MiB. Not to expose them, but to enlist. After she outwits the organization and impresses Agent O (Emma Thompson), Molly gets hired on a probationary basis and stationed in England as Agent M.

Also Read: Can 'Men in Black: International' Bring in Moviegoers Without Will Smith?

Her new partner is H (Hemsworth), who saved the world a few years ago and has been riding on the coattails of that one success ever since. H is irresponsible and slightly inept, but he’s one hell of a party animal, so when a visiting alien dignitary comes to Earth looking for a good time, the MiB give him the chaperone job.

M tags along, and it’s a good thing too, because assassins kill the alien they were supposed to protect, and just before he dies he gives M a mysterious puzzle box and a warning that MiB might be compromised. Before long M and H are on their own, traveling the globe and getting in one exciting action sequence after another, in one attractive locale after another.

In case it wasn’t clear, Hemsworth plays the “Men in Black” version of James Bond. He’s dapper and charming, and good in a scrape, but he’s terrible with protocol, too eager to resort to violence, and a hopeless flirt. Meanwhile, M has her rookie moment, but she quickly finds herself scaling sheer rock faces while dressed like Ethan Hunt, and then fighting Rebecca Ferguson, playing an alternate reality version of Ilsa Faust if she had Sia’s hair and that third arm from “The Dark Backward.”

The aesthetic actually fits. “Men in Black” always looked like it bought its sets secondhand from Ernst Stavro Blofeld, and the heroes were always too cool to take the action seriously. “International” takes the production design of the original “Men in Black” and throws it on top of an old-school matinee spy thriller. Director of photography Stuart Dryburgh (“Ben Is Back”) gives the film a bright, alluring travelogue aesthetic, and composer Chris Bacon (“Sherlock Gnomes”) gives Danny Elfman’s original, eclectic “Men in Black” score an action movie punch-up.

There’s one thing for sure: F. Gary Gray knows how to make affable, effective blockbusters. He did it before with “The Italian Job” and “The Fate of the Furious,” and he’s doing it again now. “Men in Black: International” is almost confrontationally likable, as though the dazzling cast and nimble direction are daring you to find a flaw. This is straightforward, charming sci-fi entertainment for (pretty much) the whole family. What more could you want?

Well, there’s one other thing we know for sure: F. Gary Gray can bring even more to a film when he wants to, and the director of “Straight Outta Compton” seems to have resisted the urge this time around. Thompson and Hemsworth are electric, but they have nothing meaningful to say to one another, and the film’s plot about super-weapons and moles in the MiB is stridently old-school, to the point that it’s almost completely irrelevant to the present day.

In a world where immigration issues are at the forefront of the political landscape, the most “Men in Black: International” can think to say about the topic — which is, again, the fundamental premise of the entire franchise — is that sometimes aliens are good and sometimes they’re bad. And when they’re bad, it’s a good thing if the good guys have giant energy guns. Apparently. It doesn’t seem to have been thought out very well.

It’s unreasonable to criticize the nutritional value of a Cheeto. A balanced meal wasn’t what Frito-Lay was going for, and you could say the same thing for “Men in Black: International.” It lacks ambition or depth, but it’s delicious and filling, proving (as if anyone still needed proof) that Tessa Thompson and Chris Hemsworth are two of the most likable movie stars in the galaxy.

You could cast “Thompsworth” in an educational film about sawdust, and they’d still find a way to make it fabulous. Put them in a film with slick production design, fun action and a highly conventional screenplay, and you’ve got a truly enjoyable, albeit superficial, summertime treat.