The original feature stars Buckley as a woman who, in the aftermath of a personal tragedy, retreats to be alone and hopefully heal in the English countryside. Once there, however, someone or something from the surrounding woods appears to be stalking her. As described in the official synopsis, “what begins as simmering dread becomes a fully formed nightmare, inhabited by her darkest memories and fears.”

The new film is described as a “feverish, shape-shifting new horror film” and indeed this teaser confirms that Garland has very much made a horror movie. While one could fairly categorize his previous efforts as versions of horror films, “Men” looks to be embracing the genre fully. 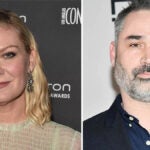 Also Read:
Kirsten Dunst to Star in Alex Garland’s ‘Civil War’ for A24

Garland is coming off the mesmerizing FX on Hulu sci-fi series “Devs,” but “Men” appears to find him ditching sci-fi for a spell after his most recent previous efforts explored different facets of the science-fiction genre. Or perhaps there’s a sci-fi surprise lurking somewhere in “Men.”

We’ll find out when the film hits theaters on May 20. For now, watch the teaser trailer in the video above and check out the first poster below. “Men” also stars Rory Kinnear and Paapa Essiedu.