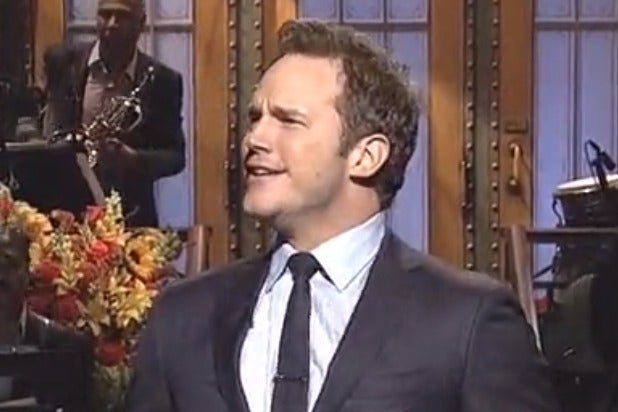 The former “Saturday Night Live” scribe made his debut on the 40th season opener, hosted by Chris Pratt, and while he hit a few rough patches, the comedian eventually found his footing and proved to be a well-matched foil for Colin Jost‘s more droll approach.

Their best collaboration was a shout-out to President Barack Obama, telling him to hang in there amid low approval ratings. Che’s joke about the POTUS opening a marijuana distillery called “Barack O-Ganja” after he leaves office was his best and funniest.

To show that there were no hard feelings, recently booted anchor Cecily Strong returned as “the girl you wished you hadn’t started a conversation with at a party” and even worked with Che to make the bit comical.

As for Pratt, he’s funny in a goofy, masculine, comic-book nerd kind of way.

So, it’s no wonder that when he helmed the show this weekend, most of the sketches came from that milieu. This includes an irreverent Marvel parody short, an uneven-but-humorous action figure bit and a too-smart-for-the-room jab at 1980s sitcoms.

The cartoonishly handsome actor was extremely comfortable in all of the aforementioned, male-heavy segments, and delivered his strongest turns as He-Man and a troubled preteen on an unnamed NBC comedy. And his monologue, which allowed him to play the guitar and sing about having sex and making a baby with his wife, actress Anna Faris, wasn’t hilarious but it worked.

The same can’t be said for Pratt’s impersonation of NFL Commissioner Roger Goodell in the show’s unimaginative cold open. To be fair, Pratt wasn’t the only one to flatline in the mildly amusing piece, which poked fun at the league’s lack of self-awareness, sensitivity and honesty. “SNL” veteran Kenan Thompson was the only one to generate real laughs as a question evading Ray Lewis.

Later in the show, the cast took a much smarter swipe at the NFL in a bit where the players introduced themselves by disclosing all of their criminal pasts. Leslie Jones, one of the show’s writers, stole the sketch when she played a battered wife who hit her husband back. Jones was less impressive as a single and desperate version of herself on “Weekend Update.”

With the exception of Strong’s “Weekend Update” appearance, she was noticeably absent from most of the testosterone heavy sketches, as were cast members Vanessa Bayer, Kate McKinnon and Sasheer Zamata.

Aidy Bryant got the most screen time appearing in a number of sketches and both the Marvel and Cialis shorts. Meanwhile, musical guest Ariana Grande sexed up the joint with a racy but tasteful performance.

Even more jarring than the lack of feminine energy in the season opener was not hearing Don Pardo’s iconic voice. Former “SNL” star Darrell Hammond replaced Pardo, who died in August, but his voice lacked impact. Hopefully, that will improve over time.