Some casting what-ifs make perfect sense when you hear them; others are utterly mystifying. This new revelation from producer Kelly McCormick falls into the latter category. When discussing the cornucopia of cameos in this week’s very fun “Bullet Train” with Indiewire, McCormick let slip that Michael Shannon (who has a small role in “Bullet Train” as the movie’s big bad) was originally supposed to be cybernetically enhanced, time-traveling heavy Cable in “Deadpool 2.”

Both “Bullet Train” and “Deadpool 2” were directed by McCormick’s creative (and life) partner David Leitch. And apparently the Michael Shannon-as-Cable rumor had been around for a little while but hadn’t been confirmed – until now.

“He actually almost was Cable,” the producer told Indiewire. “Then there was some sort of hiccup conflict at the very last minute, and then we just ended up reconnecting on this one and felt really lucky that this was the role for him. Because Josh [Brolin] was so good as Cable, I can’t even imagine [what that would have been like].”

It’s true – Brolin bulked up, almost unrecognizably, for Cable in “Deadpool 2” and in the process brought an iconic comic book character (from the “X-Men” mythology) come to life. The movie wound up making nearly $800 million worldwide.

In “Bullet Train,” Shannon plays The White Death, a notorious Russian crime lord who has risen to power in the Japanese underground and has several connections with the various killers and criminal types on a runaway bullet train (including Brad Pitt’s Ladybug). While his role is little more than an extended cameo, Shannon makes the most of the role, fully inhabiting the character in a way that only he could.

“Bullet Train” is out now. 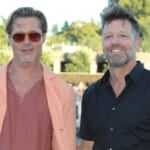