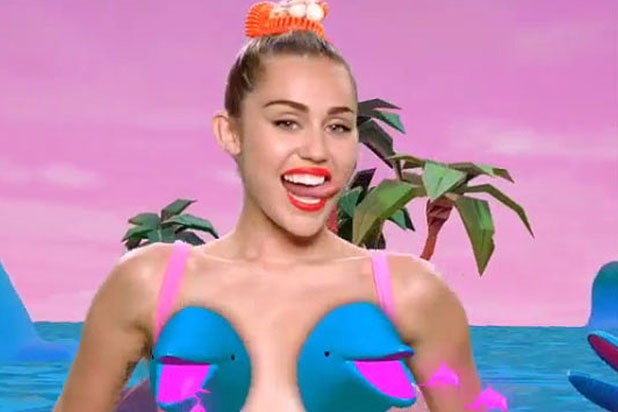 Miley Cyrus is no stranger to showing skin. So it should come as no surprise that she’s baring her body to promote the 2015 MTV VMAs, which she’s hosting.

The “Wrecking Ball” singer debuted a racy video Saturday on her Instagram page to remind her 26 million followers to tune in for the VMAs and more importantly — more Miley.

The clip gives fans a 360-degree view of the topless 22-year-old, with CGI dolphins covering her breasts. She pairs the makeshift dolphin top with pink underwear and suspenders, and has her hair slicked into a top knot. She captioned the post: “F*ck yeahhhhh VMAzzzzzz!!!! #host #vmas2015 @mtv.”

Cyrus even put on a brief performance by flicking out her tongue and twirling her head, giving video vixens a run for their money.

“I don’t get the violence revenge thing. That’s supposed to be a good example?” Cyrus told Marie Claire in an interview hitting newsstands on Aug. 18. “And I’m a bad role model because I’m running around with my titties out? I’m not sure how titties are worse than guns.”

The 2015 MTV VMAs air live from the Microsoft Theater in downtown Los Angeles on Sunday, August 30 at 9 p.m. ET/PT.