Set to premiere on Thursday, June 3, “Million Dollar Listing: Ryan’s Renovation” follows Serhant and his wife Emilia as they “gut the newly acquired 7,900 square foot home to create the home of their dreams with enough room for their big Greek family.”

Episodes will chronicle the transformation of the five-floor property, including “bumps and curveballs” along the way, like “COVID postponements, elevator installations, questioned decisions and millions spent over budget.” 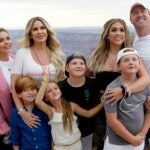 Also Read:
‘Don’t Be Tardy’ Canceled on Bravo After 8 Seasons

Watch a preview of the series above.