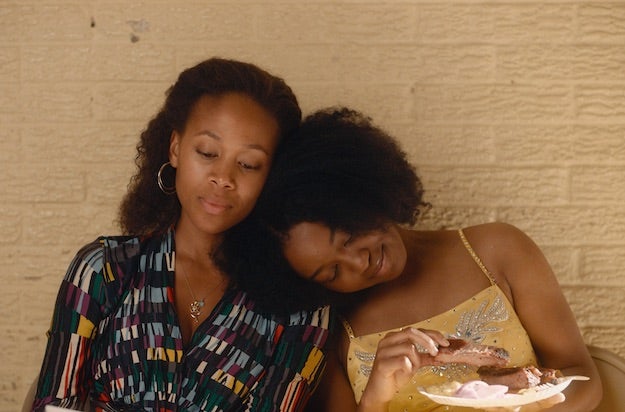 This may be a year in which the national mood on the Juneteenth holiday is one of outrage and anger, but the movie “Miss Juneteenth” is interested in different emotions altogether. It may be timely because of its title and its examination of an entirely African-American community, but it’s a quiet, character-driven film that lets personal stories give insight into larger issues.

Set in Texas, where the Juneteenth holiday originated, the film draws on the memories of writer-director Channing Godfrey Peoples. She grew up in Fort Worth and remembered the annual Miss Juneteenth beauty pageant where one young woman would win a full scholarship to the historically black college or university of her choice.

The pageant serves as backdrop, and also as a symbol of hope for young mother Turquoise – not hope for herself, but hope for her 14-year-old daughter, Kai. “I’m gonna make sure she’s something we ain’t,” Turquoise says to her estranged husband, Ronnie. “She’s my dream now.”

Also Read: What to Watch on Juneteenth: A TV Viewing Guide (Photos)

Dreams don’t come easily in “Miss Juneteenth,” and first-time feature director Peoples rarely overplays her hand or slips into melodrama. The film is relentlessly understated, casting a sad but affectionate eye on a community’s daily life, and on the rituals that hold it together.

Nicole Beharie stars as Turquoise and Alexis Chikaeze as Kai in the film, which premiered at Sundance in January and moved to digital on June 19 in lieu of a theatrical release. It begins with the hymn “Lift Every Voice and Sing” and ends with an uplifting blues number, and you could say that the action takes place in between those songs in more ways than one.

Turquoise, we learn right away, was herself the winner of the 2004 Miss Juneteenth crown, and it’s something she can never forget; not only does she still own her gown and tiara from that pageant, it’s routinely mentioned in the bar where she works (one of a couple of jobs he has) that she’s an honest-to-God beauty queen.

But Turquoise didn’t get to take advantage of the scholarship, because she got pregnant shortly after winning. So now, 14 years later, she’s pinning her hopes on Kai, sure that if her daughter buys the perfect gown (which may require leaving the power bill unpaid) and performs the same Maya Angelou poem that mom did, she’ll become a second-generation Miss Juneteenth.

Kai doesn’t particularly want to go to all the trouble of trying to conform to the pageant’s clearly outdated vision of black womanhood – she’d rather try for a scholarship with her hip-hop dancing. But mom will not be denied, even if circumstances suggest that she shouldn’t push her daughter to live the life that Turquoise wanted for herself.

Peoples has an eye for the gathering places in this community – the bar, the church, the pageant. And while there’s plenty of heartbreak and hardship here, she lets it play out slowly and softly, and often as not in dead silence; only occasionally does the sparest of musical scores (by Emily Rice) enter the picture, though it begins to do so more frequently and more predictably as the movie goes on.

As the story of a mother and daughter, “Miss Juneteenth” benefits from subtle, offhand performances from Beharie and Chikaeze; as a portrait of a community, it’s layered and rich. Not a lot happens, really, but in its modesty the story packs a lovely punch.