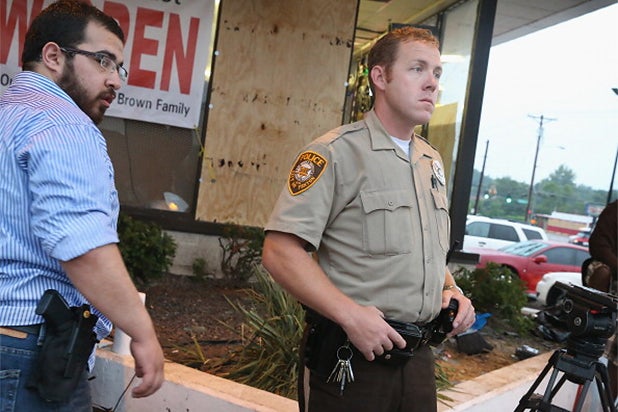 Missouri governor Jay Nixon declared a state of emergency Saturday, enacting a curfew in Ferguson. The town continues to vacillate between peaceful protests and illegal activities — including rioting and looting — in the wake of the shooting death of unarmed teenager Michael Brown one week ago.

“We must first have and maintain peace,” Nixon said during a press conference on Saturday afternoon. “This is a test. The eyes of the world are watching. We cannot allow the ill will of the few to undermine the good will of the many.”

The curfew will require people to stay indoors between the hours of midnight and 5 am.

Hundreds of residents have still been poring into the streets of Ferguson to protest the death of Brown and the aftermath, and violence picked up again overnight after police released a video implicating Brown in a strong-arm robbery of a convenience store.

Police chief Thomas Jackson had to later clarify that Darrell Wilson, the police officer who fatally shot Brown, did not stop the teenager because of the robbery.

While local authorities are in charge of investigating Brown’s shooting — Wilson has not yet been charged — the FBI has mounted a separate investigation into possible federal civil rights violations.