A moderator fainted and crashed to the floor on air Tuesday during the U.K. Prime Minister Debate, prompting the cancelation of the live debate.

Conservative channel TalkTV, who hosted the debate, announced that the event’s presenter, Kate McCann, was “fine,” but that the debate would not continue following the incident.

McCann fainted while candidates and British politicians Liz Truss and Rishi Sunak debated in their competition to fill the open Prime Minister position.

The video, caught by TalkTV, captures Truss’ reaction to McCann’s fainting. While responding to a question, the Foreign Secretary witnessed McCann collapse and abruptly stops talking. “Oh my god,” said Truss, before stepping off camera and appearing shaken up.

“Kate McCann fainted on air tonight and although she is fine, the medical advice was that we shouldn’t continue with the debate. We apologise to our viewers and listeners,” TalkTV tweeted.

Announced as the final two candidates, Truss and Sunak will go head-to-head in the race to replace Boris Johnson, who announced that he would step down as the leader of the conservative party earlier this month.

Beating out International Trade Minister Penny Mordaunt in the most recent runoff, Sunak led the race after winning 137 votes, while Truss obtained 113 votes. Eight candidates were eligible in the first voting round of five. The two final candidates will continue their campaign by traveling across the country to promote their candidacy.

The conservative party will announce their selection for the party’s new leader on Sept. 5, who will likely take over the position Sept. 6. 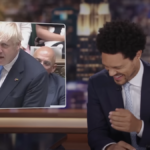