Half a year ago, one of Netflix’s largest international series — Spain’s “La Casa De Papel” (aka, “Money Heist”) — wrapped its fifth and final season in a blaze of agonizing glory. Now, fans who are missing out on thrills, red jumpsuits and masks galore can rejoice in the streamer’s Korean remake, “Money Heist: Korea — Joint Economic Area,” which debuted a main teaser unraveling a bit of the fan-favorite robbers’ motives.

The trailer traces the origins of the Joint Economic Area, a fictionalized mint located where present-day North and South Korea are divided. While the aim of reunification is to benefit all citizens and establish a common currency, “in reality, only the rich got richer,” the trailer’s narrator says. 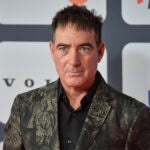 While the series will reimagine certain elements of the beloved original, its cast has analogues to first season characters in “La Casa De Papel,” such as Helsinki and Oslo. Additionally, the garb in the remake features Hahoe masks, which are part of ancient traditional ceremonial South Korean attire, instead of Salvador Dalí coverings.

BH Entertainment and Zium Content are producing the series, which will debut Part 1 on Netflix June 24. 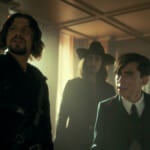