Duke Ellington’s “Mood Indigo” was heralded at the time of its 1930 release for its “upside down” jazz arrangement, where muted instruments were played at an opposite pitch than as traditionally used. The song serves as a fitting title for Michel Gondry’s new film, which utilizes all of the French filmmaker’s stylistic flourishes — off-the-wall characters, seemingly handmade special effects, blurred reality and fantasy — to tell a story steeped in melancholy, rather than his usual sense of romantic hope.

A beautiful love story that offers an often literal interpretation of the feelings we endure when we’re in relationships, “Mood Indigo” is Gondry’s return to the bittersweet territory he mined in “Eternal Sunshine of the Spotless Mind.”

It’s also his most accomplished and powerful film in almost a decade. 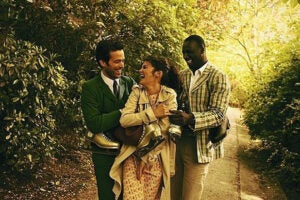 Romain Duris (“Populaire”) plays Colin, a wealthy inventor who decides that he’s inconsolably lonely after his best friend Chick (Gad Elmaleh, “Midnight in Paris”) announces that he’s fallen in love. While attending a party with Chick and his lawyer Nicolas (Omar Sy, “The Intouchables”), he meets Chloe (“Amélie’s’ Audrey Tautou).

Despite his insecurities, Chloe quickly falls for him, and they wed. But not long after the marriage begins, Chloe falls prey to an unusual illness, which Colin vows to fight — even if it costs him everything else in his life.

Quirkiness is a recurring quality in Gondry’s films, and it can sometimes be as precious as it is adorable. But when he uses it in the service of telling a great story, it’s a tool that he wields better than just about any filmmaker in the world. And “Mood Indigo” plays a little bit like a live-action version of the Tex Avery cartoon “Symphony in Slang,” where a man recollects the experiences of his life purely with various figures of speech. Everything Colin experiences, and every feeling he has, is represented in some physical form.

When Colin and Chloe get married, for example, the ceremony is shot underwater — they’re “taking the plunge,” so to speak. Or when Colin starts worrying about Chloe’s health, the walls literally close in on him. But Gondry never lets his sight gags overwhelm genuine performances. Instead, he uses them to augment the visceral experience of watching this couple go through the rhythms of falling in love and then fearing for one another’s well-being.

Despite his classical good looks, Duris does a terrific job playing Colin, a character whose life pre-Chloe is “perfectly” together – but without the ups and downs of passion. As his lover, Tautou has played similar roles in the past to great effect, but here she gives the relationship strength, even when she begins to succumb to the effects of her disease. As Nicolas, meanwhile, Sy provides both comic relief and a sort of running commentary for the trajectory of their relationship — and his diminished presence in the second half of the film helps communicate the impending sense of tragedy.

Poetically simple and undeniably powerful — even when the visuals verge on the bizarre — “Mood Indigo” perfectly balances Gondry’s ornamental creativity and the verité storytelling of his more recent work, combining refined style and raw emotion into one devastating, beautiful package.