Marvel Studios’ latest original series for Disney+ (and its first since “Hawkeye” last Christmas) stars Oscar Isaac as the title character and Ethan Hawke as his shadowy nemesis. Not the most well-known or popular comic book character, that means there is a true black slate and an opportunity to create a beloved MCU icon almost from scratch. But every hero’s journey has a beginning and this week we get the start of the “Moon Knight” saga.

Shall we break down these first steps? 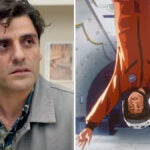 A Man Without Love

The premiere episode opens not on Oscar Isaac but rather Ethan Hawke, playing Arthur Harrow. We didn’t know much about his character before the show and we honestly don’t know all that much after the first episode. But this initial scene certainly sets the stage: we see him at a desk. He grabs a glass of water, fills it, and then smashes the glass with his large metal cane (the handle being formed by the heads of two crocodiles). Once the glass is smashed, he grabs his shoes – leather man-sandals, and pushes the shards of glass into the sandals. Then he puts his feet in the sandals. (It should also be noted this entire scene is set to the longing strains of Bob Dylan’s “Every Grain of Sand.”) Harrow puts on the sandals and walks into a large, open room, that looks something like an ancient temple. Ouch.

Instead of the familiar strains of the Marvel Studios theme music (composed by the great Michael Giacchino), we are instead greeted by a surprising needle drop: Engelbert Humperdinck’s “A Man Without Love.” Isaac wakes up as Steven Grant, who apparently chains himself to his bed every night in his London flat. He also piles sand around his bed to see if he has gotten up and puts tape on the door. He peels off the tape, says hello to his fish Gus (who he calls a “one-finned wonder,” also notice the tiny pyramid at the bottom of his aquarium), calls his mother and says hello. Isaac is typically doing a heightened version of a British accent, which is somehow both convincing and five degrees away from being Dick Van Dyke in “Mary Poppins.” Still, this accent is important. Remember it well. As if you could forget.

He leaves his flat, gets on a bus, and promptly falls asleep on someone. When the bus stops he approaches a museum where he works. He walks in and talks to a young girl on a tour who thinks that the Egyptian artifacts are a bit boring; much in the same way Alan Grant was keen on scaring the shit out of a little kid in “Jurassic Park,” Grant takes a go at this young girl, describing in fairly graphic detail the mummification process. When he describes being judged on an astral plane, she asks him how he was judged. “I’m not dead am I?” he asks her rhetorically. And then, after a beat: “Am I?” While we’re fairly certain the show won’t end on some “Sixth Sense”-style reveal, this question (and the idea of the astral plane) we’re fairly sure will be recirculated later. He’s then called back to his job: he’s not an archeologist or a curator or some Egyptian scholar; he works at the gift shop.

When a cute coworker comes up and flirts with Steven, he doesn’t have any idea what she’s talking about. “We still on for tomorrow?” she asks. He says yes but hasn’t a clue. When he leaves work he goes to the park and eats a sandwich next to one of those guys who paints themselves to look like a statue. Steven pours his heart out to this guy who doesn’t say a word back (he’s a statue). It’s both funny and painfully sad, speaking volumes to the isolation and confusion of Steven’s life. He walks away from the park, passing by a puddle that reflects the entire scene (reflections are very important! There will be more!)

Back at home, Steven tries to stay away (after, you know, getting into bed and shackling himself). He listens to a self-help tape about clearing your mind; he does puzzles and reads books on Egyptian history – in particular a passage about The Ennead, sort of the ancient Egyptian version of the Avengers, comprised of a bunch of animal-headed deities. (He mentioned them to his dull-as-dishwater boss at the gift shop earlier.) He closes his eyes. Maybe this will be the restful sleep he yearns for? 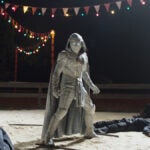 When Steven wakes up he’s in grass. He gets up and it looks like the Alps. He hears a menacing voice in his subconscious (voiced by screen legend F. Murray Abraham), who bellows, “Get up worm!” And then: “Surrender the body to me!” Steven finds a golden scarab in his pocket. He looks for help and instead finds a pair of goons firing automatic weapons at him.

Steven runs into a nearby village, which has the look of a typical European town – uneven cobblestone streets, worn buildings, slanted storefronts. There’s a large group of people standing around. Hawke’s Harrow walks through them. They clearly respect him. “Who would like to go first?” he asks. A young man moves over to him. Harrow puts the alligator-headed cane on the mans wrists and looks at his own wrist, which is tattooed with scales. As he touches the young man, the scales animated; his fate is in the balance. “This is the face of a good man!” Harrow exclaims and lets the man go. Then an elderly woman walks up to him and he does the same thing; Harrow’s scales tattoo turns red. “Ammit has decided,” Harrow says. And he sucks the life force out of her. She crumples to the ground, dead.

A couple of Harrow’s goons approach and say that Steven has gotten away. Harrow says something and all of his followers drop to their knees. But not Steven. “Oh bollocks!” he says. Harrow asks for the scarab and Steven tries to give it to him but fails; voices talk to him and his body contorts, keeping him from handing the scarab over. Yes, this is like a more serious version of “The Mask,” but Isaac, ever the nimble performer, equips himself beautifully. He has to do so much in this show (you read the part about the British accent right?) and it does it all so well.

Steven blacks out for a second and wakes up covered in blood and surrounded by several dead goons. (The scarab is also coated in blood.) He jumps in a cupcake delivery truck (!) and takes off, the radio blaring Wham’s “Wake Me Up Before You Go-Go” (the needle drops in this episode!) There’s a very big, expensive-looking car chase and at one point he cuts off a truck carrying timber. Finally he gets cut off by the goons, gets out of the cupcake delivery truck and some of those same logs come crashing down the side of the mountain, killing the goons in a deliciously “Final Destination” fashion.

Cut to black. Steven wakes up back in bed.

Steven goes about his usual routine but is knocked off his axis almost immediately: he notices that Gus has two fins now. He throws the fish in a blender (the cup part, plus it’s not on) and takes the fish to the pet store. He wants to know if the fish can grow back a fin, there’s a “Finding Nemo” joke and then Steven is struck by the time – he’s late for his date with his coworker!

He goes to the restaurant (Steven is a vegan but his alternate else apparently enjoys a good steak) and she isn’t there. She calls her and she tells him that “I ate a steak alone two days ago.” It’s Sunday. He thinks it’s Friday. He sheepishly orders a steak without knowing how to order a steak and it’s some of the best, most affecting acting of the entire first episode. It’s heartbreaking and real and he does such an amazing job.

Steven walks home and calls his mom. He gets home to his flat and starts eating chocolates. One falls on the floor and he notices scratch marks in the floor. This leads him to find a panel that is ajar in the ceiling. There’s a loose board and he finds an old school flip phone and a key. He opens the phone and sees dozens of missed calls from someone named Layla. As he’s holding the phone Layla calls. “Why didn’t you call me Marc?” she screams. She’s been texting and calling him for months. “Why did you call me Marc?” Steven asks. And then he hears Marc’s voice, free of British accent. “You’re going to get yourself in trouble,” Marc says. The lights flicker and Steven runs into the hallway and into the elevator.

At the far end of the hallway Steven glimpses a giant, bird-skull-headed god. The creature comes towards the elevator and almost gets in with Steven. But instead it’s an old lady, who is wondering why the man in the lift is losing his marbles. He blacks out and wakes up on the bus. He sees the creature standing on the street. He gets out of the bus and sees that Ethan Hawke’s Harrow was on the same bus. They’ve found him.

Steven enters the museum and tells the security guard (who can never remember his name, he keeps calling him “Scotty”) that there’s someone who is following him. As he goes deeper into the museum, he sees Harrow and some of his goons. He motions for another security guard to escort. But the guard has the same scales tattoo that Harrow has. The security guard is one of them.

Harrow starts talking about unleashing a god named Ammit. “If she was free, she would have stopped Hitler,” Harrow says, before referencing other atrocities like the Armenian genocide. Steven is, to put it mildly, confused. Harrow walks up to him and puts his cane on his wrists. His tattoo starts to animate in a jittery fashion. “There’s chaos in you,” Harrow proclaims. Steven runs away and Harrow allows it.

Later, Steven is doing inventory. He hears a noise and is brought out into the museum proper. He sees what he thinks is a dog. But it’s not. It’s much, much bigger. It’s a jackal-headed god (Anubis maybe). Harrow comes onto the PA: “Steven Grant of the giftshop, give me the scarab.” Steven is chased into the bathroom, which is walled with mirrors. Marc appears in the mirrors. “I can save us,” Marc says. The problem is that Steven has to allow Marc to take over. Finally, with the creature just outside the door, he relents. The lights in the bathroom flicker and hieroglyphics appear on the walls, lighting up like neon signs.

The episode ends with a long shot that whips around the open bathroom door and pushes in, where a man in a white suit is pummeling up the jackal-headed creature (god?). The character turns around and walks defiantly towards camera. Moon Knight is here. And there’s not a damn thing we can do about it.