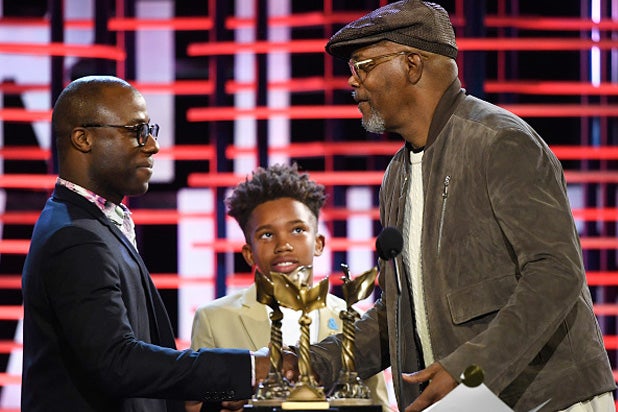 Spirit Awards voters did their part for “Moonlight.” Will Oscar voters do the same?

By giving Barry Jenkins’ acclaimed drama its best feature award, along with five other honors, the Film Independent Spirit Awards once again gave its top prize to the nominee most likely to win the Academy Award for Best Picture at a slightly bigger ceremony that takes place the day after the Spirits.

Four times in the last five years, including the last three in a row, that’s exactly what happened: “The Artist” won the Spirit Award and the Oscar on back-to-back days in 2012, and then “12 Years a Slave” did it in 2014, and and “Birdman” in 2015, and “Spotlight” last year.

In doing so, voters made a mockery of the slogan that used to surround the Indie Spirit Awards: “Win on Saturday, lose on Sunday.” It made sense back when “Pulp Fiction,” “Fargo,” “Lost in Translation,” “Brokeback Mountain,” “Little Miss Sunshine” and “Juno” were winning Spirit Awards and then losing Best Picture to bigger, more mainstream movies.

But as the Oscars got more indie, the Spirit Awards edged toward the mainstream themselves.

Spirit voters tried to continue the trend on Saturday by giving “Moonlight” awards for feature, director, screenplay, editing and cinematography, in addition to the Robert Altman Award for its director, casting director and ensemble cast.

But while they’ve given the awards to the only Spirit nominee with a real chance of winning the top Oscar on Sunday, to do that will require “Moonlight” to score a sizable upset over “La La Land,” the Oscar front-runner that wasn’t eligible for the Spirit Awards because its budget exceeded the (loose) $20 million limit for the Spirits, reportedly by about $10 million.

In other categories, Spirit Awards voters stuck to their recent habit of going for the nominee who also has a chance to win the Oscar. “Toni Erdmann,” the only Oscar nominee in the international-film field, won that award, and Oscar nominees took home Spirit Awards in the lead actor and actress categories (Casey Affleck for “Manchester by the Sea” and Isabelle Huppert for “Elle”), as well as for screenplay, editing and cinematography (all “Moonlight”).

Three Oscar nominees were also in the running in the Spirit Awards documentary category, and the voters opted for the one that’s the favorite to win on Sunday, too: Ezra Edelman’s “O.J.: Made in America.”

In fact, there was only one category in which an Oscar nominee lost to someone who wasn’t nominated by the Academy: supporting male, in which “Hell or High Water” actor Ben Foster won over Lucas Hedges, an Oscar nominee for “Manchester by the Sea.” (Marhershala Ali, the supporting star of “Moonlight” who has emerged as the film’s strongest contender for an Oscar win, wasn’t even nominated in the Spirits category.)

So “Moonlight” utterly dominated the one awards show that takes place in the daylight. As for the one that’ll happen tomorrow after dark, that’ll be a much tougher task for Barry Jenkins and crew.

But for now, hope springs eternal, even as that “win on Saturday, lose on Sunday” motto looms.