The panelists on Wednesday’s “Morning Joe” think that former President Donald Trump’s ban from Twitter is the best thing to happen to Republicans’ electoral chances lately.

While discussing Republican Glenn Younkin’s victory over Democratic incumbent Terry McAuliffe in Tuesday’s gubernatorial race in Virginia, “Way Too Early” host Jonathan Lemire said, “As much as Trump looms, Democrats believe, as an existential threat to the democracy, we will see in 2024 that it was too much. Voters were turned off. They didn’t buy the argument that Youngkin was Trump and Youngkin did a good job of keeping Trump at arm’s length. I was talking to a Republican strategist last night who said the best thing that can happen to any Republican who is paid to win an election, certainly in a moderate or swing district, is that Donald Trump is off Twitter.” 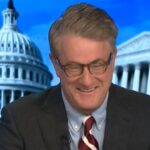 Lemire noted Trump “doesn’t dominate the conversation like he used to” and added, “If you can keep him off stage, even a little, that can be a playbook for 2022 and beyond.”

Host Joe Scarborough seconded that, saying that Republicans to whom he has spoken have said, “Thank God Trump is off Twitter.”

Democrats, Scarborough added, wish the former president were still on social media. He was banned from all the major platforms after the deadly riot at the Capitol on Jan. 6.

Scarborough has been a vocal critic of Trump for years but has repeatedly made the point this week that Youngkin avoided association with the former president. He openly laughed Tuesday at the fact that Trump virtually rallied for Youngkin on Monday, but the gubernatorial candidate made it clear he was not affiliated with the tele-rally and did not show up to it.