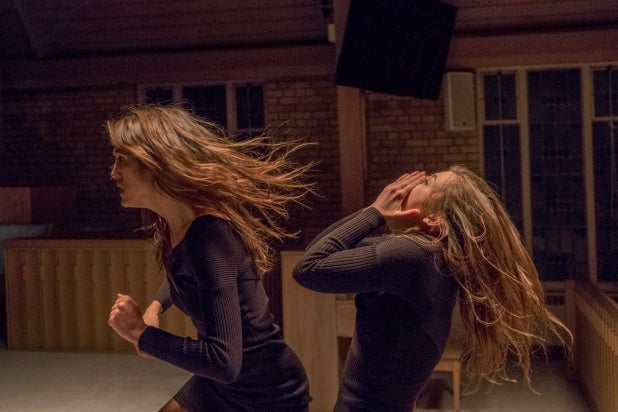 “Mouthpiece,” Patricia Rozema’s defiantly experimental drama, gives voice to many conflicts. Most of these are cleaved bluntly down the middle: internal dichotomies, familial divides, generational gaps, gender inequality. But it’s the singular, and universal, pain of loss that proves most shattering.

Rozema (“I’ve Heard the Mermaids Singing”) was inspired to adapt the award-winning play of the same name when she saw it in Toronto, and she works in striking synchrony with her collaborators, Amy Nostbakken and Norah Sadava. Nostbakken and Sadava, who co-wrote the play and the screenplay, also portray simultaneously co-existent versions of our protagonist, Cassandra.

Confused? The approach is indeed destabilizing at first. As they move in perfect tandem or argue with evident intimacy, we wonder if the two women are lovers, or perhaps sisters. But their duality quickly comes to feel utterly normal.

Ultimately, the filmmakers’ intention isn’t to throw us off but to invite us in, to encourage us to wonder: Is it really so strange for one woman to have two reactions to life? While Nostbakken’s Cassandra might be able to pull herself together for the outside world, Sadava’s might be quietly falling apart. Or Nostbakken’s Cassandra could be openly furious, while Sadava’s is able to gaze politely upon someone driving her crazy.

Their emotions are pushed to the very limit soon after the film opens, and Cassandra notices that she missed a dozen calls while out partying the night before. As she starts listening, our blood runs cold alongside hers: we hear her mother, Elaine (Maev Beaty), speaking in a confusion that unfolds through the messages into a severe stroke. The last, devastating phone call regards funeral plans.

When the entire family decisively rejects Cassandra’s offer to deliver Elaine’s eulogy, we wonder what her two personalities represent. The most obvious answer is mental illness. But this movie is after something different, something that speaks as much to the outside world as any interior one. So we watch as Cassandra travels through Toronto with her tandem selves, taking care of the details designed to keep mourners moving forward: choosing flowers, calling relatives, visiting with friends.

The hardest task, though, is the eulogy itself, which she is determined to give despite — or perhaps in some way because of — everyone’s mysterious objections. As she flashes back on her mother’s life looking for answers, she wonders what it all added it up to, and if it was enough.

The film asks similar questions, while contrasting two generations of women who seem to be so different. The deeper into Elaine’s life we wade, the stronger their connections seem to become. Sometimes they run parallel (both women are gifted writers) and sometimes they’re perpendicular: Cassandra has found success in her chosen field, while Elaine never made it through the thicket of obstacles that came between her and publication.

Also Read: Julianna Margulies on CBS Not Paying Her What She Wanted to Appear on 'The Good Fight': 'I Wasn't Asking for a Million Dollars'

Rozema has talked about “Mouthpiece” as a reflection on women moving through a patriarchal world. What feels more striking here, though, is how her characters move through their own, multitudinous universe. They may be responding to outside forces, from businessmen who instinctually dismiss middle-aged mothers to saleswomen pushing Spanx on insecure young customers.

But they have their own agency too, an internal strength highlighted by Catherine Lutes’ warm cinematography, Leah Fay’s witty choreography, and Nostbakken’s insistently feminine score, which is literally composed of women’s voices. And we see it most of all in Cassandra’s clamorous search for self-expression, which comes to look less like externally imposed frailty and more like innate wisdom borne of a survival instinct. She fights with herself and her mother so furiously not because she’s weak or neurotic or broken, but because she knows, even in the hellish depths of grief, that each of them is worth fighting for.