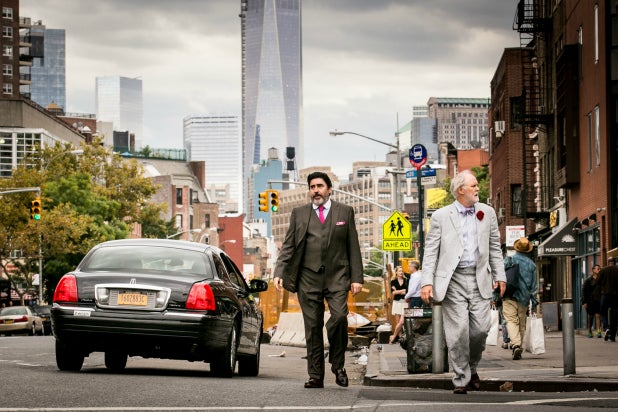 This weekend, 16-year-olds across the nation will have to ask their parents for help if they want to watch women exploited, tough men murdered, and guts fly across the screen.

If they want to watch a delicate, realistic story about two men in a long-term relationship, they will have a similar problem.

Once again, the MPAA is coming under fire for its arcane ratings system, which this time around, has given both ultra-violent comic book flick “Sin City: A Dame to Kill For” and Ira Sachs‘ critically acclaimed Sundance drama “Love is Strange” R ratings.

But unlike Robert Rodriguez and Frank Miller‘s stylized neo-noir dystopia, “Love is Strange,” which stars John Lithgow and Alfred Molina, contains zero violence or nudity. Ostensibly, the film was given the rating for “strong language,” as it apparently exceeds the MPAA’s minuscule limit for curse words, though any audience member would be hard-pressed to remember a single instance of one being used in the Sony Pictures Classics release.

Meanwhile, films like “The Expendables 3” scored a PG-13 rating, despite featuring violence as the one (weak) lure to come see it at all.

The rating has drawn outrage from critics and bloggers alike, led in part by Newark Star-Ledger critic Stephen Witty’s excoriation of the industry group’s decision.

“This is a gentle, if often heartbreaking story about two loving men in a long-time committed relationship. What on earth is in it that so horrifies the MPAA?” he asked, rhetorically. “I’m sorry. I think I just answered my own question.”

Other writers were less veiled in their anger and accusations.

“Let’s hope parents are smarter than this,” J. Bryan Lowder wrote at Slate. “There is nothing ‘adult’ or at all worrisome about a movie that quietly and gently portrays a gay couple and their struggles. To think otherwise is to participate in an insidious sort of homophobia that uses child-sized human shields to disguise basic prejudice.”

See photo: This ‘Sin City’ Eva Green Poster Has Too Much Nipple for the MPAA

Writers at Queerty, The Guardian and The Independent also voiced their objections; in the UK, the film was rated OK for 15-year-olds, while it’s a PG in Canada.

The MPAA has a track record for being overly harsh on LGBT-themed films. Last year, Darren Stein, the director of “G.B.F.,” called out the organization in a widely-read Facebook post.

“I always thought of G.B.F. as a PG-13 movie, but we were given an R ‘For Sexual References’ while not having a single F-bomb, hint of nudity or violence in the film,” he wrote. “Perhaps the ratings box should more accurately read ‘For Homosexual References’ or ‘Too Many Scenes of Gay Teens Kissing.’ I look forward to a world where queer teens can express their humor and desire in a sweet, fun teen film that doesn’t get tagged with a cautionary R.”

A spokesman for the MPAA told TheWrap: “The descriptor that accompanies the film’s rating notes that it is rated R for language – as is any film that includes the same level of strong language, regardless of subject matter.”

The MPAA has been challenged before; just last year, The Weinstein Company won a decision in which the R-rating for its Oscar-nominated “Philomena” was converted to a PG-13.

That movie had one too-many F-bombs, but it only involved child abuse, not a loving, long-term relationship between a gay couple.