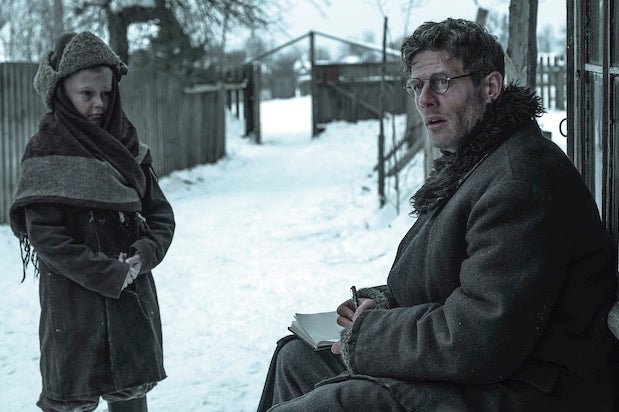 Polish director Agnieszka Holland is best known for epic films that explore the inhumanity of World War II, the Oscar-nominated “Europa, Europa” and “In Darkness,” both set in German-controlled areas during the war, among them. In a way, her new film, “Mr. Jones,” begins in similar territory, as a young Welsh journalist tries to warn British diplomats of the dangers posed by an ascendant Adolf Hitler in 1933.

But it doesn’t take long for “Mr. Jones” to turn away from Hitler and Nazi Germany and move to a different totalitarian regime and a different atrocity of the era. The “Mr. Jones” of the title is Gareth Jones, a real-life journalist who traveled to the Soviet Union in 1933 and found evidence of the Holodomor, a man-made famine that killed millions in Ukraine.

It feels as if the story would be a ripe subject for Holland. The filmmaker has not only made monumental films about historical tragedies, but she was arrested by the Soviet-backed government in Czechoslovakia after the Prague Spring and was later driven out of Poland by its communist regime.

Drawing on that personal history and on decades of artful and politically motivated filmmaking, “Mr. Jones” at times has the kind of passion and scale found in Holland’s best work. But it’s also less focused and more scattered than many of her films; even at two hours, trimmed by 20 minutes from its original running time at the 2019 Berlin Film Festival, it feels bloated at times.

The Samuel Goldwyn film, which is released on digital June 19 and on VOD July 3, oddly opens on George Orwell writing “Animal Farm,” something he did in the mid-1940s, a decade after the events depicted in “Mr. Jones.” True, Orwell’s fable was a thinly-veiled attack on Stalin’s brand of communism, and his knowledge of Jones’ reporting about the Holodomor may have factored into his writing the book – but it still feels both beside the point and too on-the-nose when Orwell drops in every so often to deliver lines like, “The world is being invaded by monsters, but I suppose you don’t want to hear that.”

People in the movie don’t want to hear that from Gareth Jones, either. The British diplomats scoff at his warnings about Hitler, he loses his job and he talks his way into a trip to Moscow, where he’s determined to interview Josef Stalin. After all, he interviewed Hitler when he was in Germany – how much harder could it be to add another dictator to the list?

Much harder, it turns out. In Moscow, Jones (played by James Norton) is followed constantly, and like all journalists he’s forbidden from leaving the city. He’s determined to figure out why the Soviet Union is touting its technical advancements and going on a spending spree when the Kremlin appears to be broke – but he’s discouraged from looking too closely by just about everybody, foremost among them Pulitzer Prize-winning New York Times reporter Walter Duranty (Peter Sarsgaard), a dissolute charmer who hosts drug- and sex-filled parties but makes it a point not to question Stalin’s party line.

Moscow is cold and forbidding, and Holland’s film often gives it a grimy majesty. But her style is restless; she’ll lay back and shoot with a stately reserve for a while, then shift to vertiginous camera angles or a dizzying hand-held trip through Duranty’s bacchanal.

Determined to do some actual journalism, Jones slips his official escort and escapes to a small town in Ukraine. There, he finds peasants forced to work loading huge sacks of grain into trucks that will take them away to be sold overseas, while their own communities starve and people die by the millions or revert to cannibalism to survive.

A lone figure against a stark white landscape, Jones travels through a nightmarish countryside made that way by Soviet policies that value the money they can make by selling the grain over the lives they’ll lose by taking it away from the people. At times, Holland lays out the desolation in stark, dramatic and sadly beautiful compositions – and at times, the camera gets jittery and nervous and showy.

The Ukraine sequence has echoes of Vaclav Marhoul’s devastating 2018 film “The Painted Bird,” set in Eastern Europe during World War II, but mostly it’s a reminder of what a powerful filmmaker Holland can be, and how attuned she is to the depths and intricacies of human misery.

Also Read: 'The Painted Bird' Director Explains Why His 'Brutal' WWII Film Is Timelier Than 'The Avengers'

Jones is eventually tracked down and caught by Soviet officials, which probably saves him from starvation but also puts him in a predicament: They let him leave the country, but make it clear that if he doesn’t bring glowing reports of Stalin’s achievements to the U.K., a half dozen detained British workers will be killed.

The movie keeps going for quite a while after Jones returns home, with the journalist confused about what to do and George Orwell re-entering the picture to offer his own advice. And while this is all true, more or less — and in a way it’s timely, since Jones’ accounts are dismissed as fake news by the mainstream media — it also feels like padding after the punch of the Ukraine sequences.

Norton makes for an appropriately fervent and upright hero, and Sarsgaard adds another to what seems to be a long list of oily, morally questionable characters. At times, “Mr. Jones” has the gravity and grace to remind us of what an accomplished chronicler of 20th-century horror Agnieszka Holland can be. And at times, it goes off track in ways that sadly undercut both the gravity and the grace.