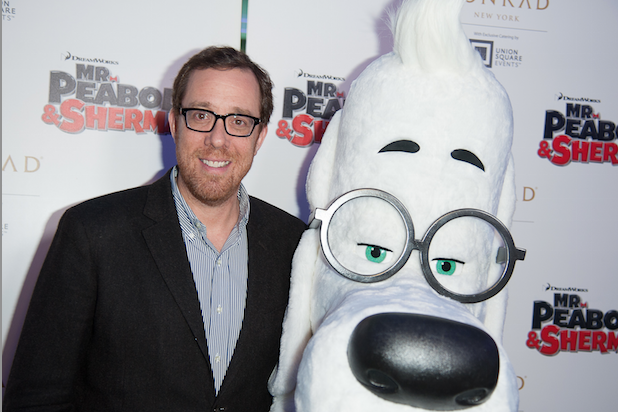 Rob Minkoff never intended for there to be a 20 year gap between his last animated feature, “The Lion King,” and “Mr. Peabody & Sherman.”

Then again, he never expected it would take more than a decade to get his big screen adapation of Jay Ward’s Saturday morning cartoons into theaters.

The director spent years securing the support of Ward’s daughter Tiffany and shuffling through a series of studio before setting “Mr. Peabody & Sherman” up at DreamWorks Animation, which is releasing it in U.S. theaters Friday. The prospect of expanding Ward’s cartoon universe kept him committed during the long development process.

“I grew up with the characters and I love the show,” Minkoff explained. “Mr. Peabody was such a rich character, but he was unexplored. There was a lot they couldn’t get to in a four and half minute short. It seemed like there was a bigger idea there.”

For those readers not steeped in 1950s and 60s era cartoons, the film is inspired by the “Peabody’s Improbable History” segments that appeared as an offshoot of “Rocky & Bullwinkle.” Like the show, the film centers on a time-traveling pooch, Mr. Peabody (Ty Burrell) with a high IQ and a human ward named Sherman.

At one point, “Mr. Peabody” had been set up at Walden Media, but the producer of “The Chronicles of Narnia” and “Around the World at 80 Days” was stretched too thin to back the picture and later asked Minkoff to bring in a financial partner. Minkoff also toyed with setting up his own studio to produce the project, before ultimately bringing the film to DreamWorks Animation in 2005.

It was a homecoming of sorts. DreamWorks Animation head Jeffrey Katzenberg previously worked with Minkoff on “The Lion King” while serving as Walt Disney Studios chairman.

Burrell was a late addition to the project. The producers originally intended to cast Robert Downey Jr. in the role, but his work on “The Avengers” and other tentpole franchises made it impossible to carve out time for him to record his part. Tiffany Ward and others at the studio resisted the “Modern Family” star, who was not yet a household name, and he only got the part after consenting to an audition.

“Tiffany is sort of the gatekeeper and she was not convinced,” Minkoff told TheWrap. “She wanted to get a soundalike, which I did not want to do. To me, there was an opportunity in casting a new voice to modernize the character. I convinced Tiffany that Ty was going to get there and he started watching the show to nail the cadence. He got the underlying connection and he made it his own.”

Over the course of the film, the title characters bounce across time, making pit stops in the French Revolution, Ancient Egypt and the Trojan War. They also interact with historical personages such as Sigmund Freud and Leonardo da Vinci.

That’s a lot of history, and there’s a good chance some of the references to say the Reign of Terror will go soaring over the heads of children in the audience. Minkoff said he strives to create a film that has something for all ages to enjoy.

“I had the great good fortune to have Chuck Jones as a mentor and one of my first questions to him, was who did they make Bugs Bunny for?” Minkoff said. “They never made the shows for kids. They made them to amuse themselves. If they laughed, it meant other people might laugh too. There has to be a range of jokes. Some are more slapstick and physical. Others are more verbal and cerebral.”

Minkoff, who got his start directing “Roger Rabbit” shorts before co-directing “The Lion King” and moving on to live action films such as “Stuart Little,” is energized by all the changes in the animation business in past two decades. Disney is no longer the only game in town, with DreamWorks Animation a legitimate rival and Fox and Universal making heavy bets  on the art form.

“It’s an exciting time for animation. The audience is growing and there’s a lot of great movies being made,” Minkoff said. “I definitely don’t think I will put 20 years between this and my next animated movie.”