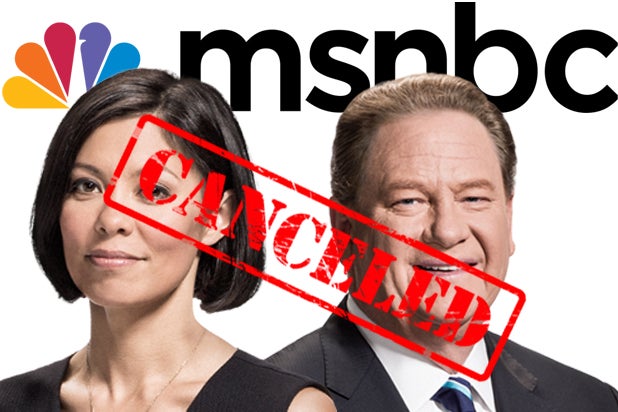 MSNBC canceled three daytime programs Thursday in the first of several moves that hopes to put a jolt into its flailing ratings.

It’s not clear who will host at 3 p.m. and 4 p.m. but Todd is expected to anchor a 5 p.m. program similar to his former program “The Daily Rundown.” Alex Wagner and Ari Melber are expected to stay with the network.

Ed Schultz and Toure are departing the network and as TheWrap first reported, Krystal Ball and Abby Huntsman will also be leaving the network.

The changes bring MSNBC back to a lineup featuring traditional hard news during the day and opinion in primetime, a move that network Chairman Andrew Lack hopes will help it compete in breaking news with CNN and Fox News.

Other likely changes include “All In” with Chris Hayes at 8 p.m. being canceled after three years of low ratings. An insider told TheWrap Hayes’ show remains on the air as Andy Lack casts a wide net for a replacement.

Media analysts are already speculating about a return of Keith Olbermann to that time period, a notion once thought of as impossible in light of his messy 2011 exit from the network.

As TheWrap reported, even with bad blood between network president Phil Griffin and Olbermann, Lack isn’t opposed to the idea of an Olbermann return. The network also aims to make Brian Williams the “face of daytime” upon his return in August.

Mediate first reported the cancelations of the 3-5 p.m. block.