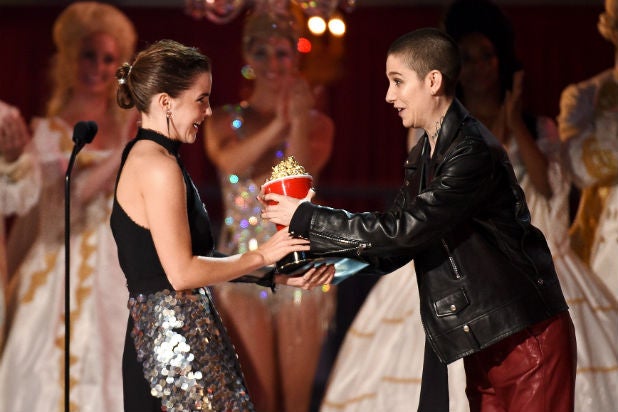 The MTV Movie & TV Awards served up a game-changer on Sunday in its decision to “explode” the convention of male and female categories, the show’s top producer told TheWrap.

Breaking from a quarter century of tradition, the show not only expanded its purview to include television  — it altogether eliminated Best Male and Best Female prizes in favor of one non-binary “Best Actor” category.

“This franchise started at a completely different time in the world, 25 years ago. Last year we said, ‘Let’s blow that format out. Let’s explode it,'” said executive producer Casey Patterson, whose eponymous production company mounted the live show from L.A.’s Shrine Auditorium.

“This is what the next 25 [years] looks like, from where the audience is,” Patterson said. “They feel like good storytelling is good storytelling, regardless of the size of the screens, and they are not looking at the world through a gender lens.”

Emma Watson won the inaugural movie-acting prize for her performance in “Beauty and the Beast.” The golden popcorn trophy (a kitschy holdover, and an icon in itself) was fittingly presented to her by Asia Kate Dillon, a gender non-binary performer currently appearing on Showtime’s “Billions.”

“The first acting award in history that doesn’t separate nominees based on their sex. It says something about how we perceive the human experience,” Watson said on stage, acknowledging the new category.

“MTV’s move to create a genderless award for acting will mean something different for everyone. But to me it indicates that acting is about the ability to put yourself in someone else’s shoes and that doesn’t need to be separated into two different categories,” Watson concluded.

In addition to her speech, Watson and other attendees like Trevor Noah and cast members from “Stranger Things” and “Transparent” all sported “&” pins — a symbol created by GLAAD to represent their work on issues like immigration, racial justice, women’s rights and LGBTQ acceptance in the Trump Era.

Patterson wasn’t kidding about the different world in which the MTV awards franchise began. The first MTV Movie Awards were held on the Disney lot in 1992. Dennis Miller hosted, and Linda Hamilton and Arnold Schwarzenegger won Best Actress and Actor, respectively, for “Terminator 2: Judgment Day.”

That was also the year author Leslie Feinberg published “Transgender Liberation: A Movement Whose Time Has Come,” considered a definitive text on the almost-entirely undocumented trans experience.

It was early days for the LGBTQ movement at large, as homosexuality had only just been declassified as a mental illness by the World Health Organization that year.

A year later, a trans man named Brandon Teena was murdered, a crime that would be retold in the groundbreaking film “Boys Don’t Cry,” which landed Hilary Swank an Oscar for her portrayal of Teena.

Though MTV Movie & TV Awards may not be as hallowed as Hollywood staple shows like the Oscars or Emmys, the gender conversation is becoming more prevalent.

Dillon recently sent an impassioned letter to the TV Academy asking for their definition of gender so they (the actor’s preferred pronoun) could choose a category for Emmy Awards consideration.

“Furthermore, if the categories of ‘actor’ and ‘actress’ are meant to denote assigned sex I ask, respectfully, why is that necessary?” they added.

In a response, the academy said actors can submit their work for consideration in the category that suited them best, “with no required background on sexual or gender identification.”

Dillon and Showtime submitted to the Outstanding Supporting Actor in a Drama Series category.