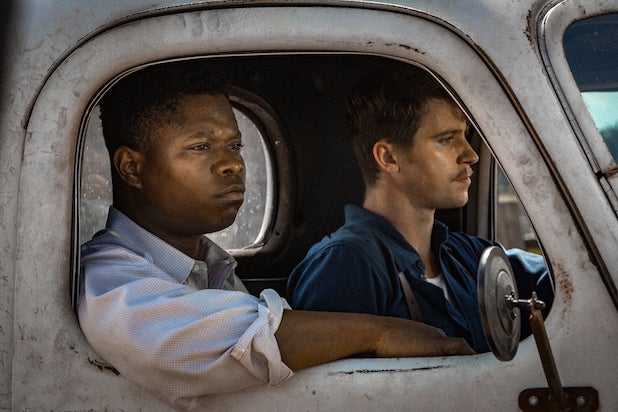 This review was first published after the Sundance Film Festival premiere of “Mudbound” in January 2017.

A year ago at Sundance, a film that detailed the brutality visited upon blacks in the American South got a thunderous reception in the festival’s Eccles Theatre, prompted an immediate bidding war and briefly became an Oscar front runner, until time and publicity spectacularly derailed its chances.

And 12 months after that debut for Nate Parker’s “The Birth of a Nation,” another film came to the Eccles to graphically detail violence on African Americans, this time in post-World War II Mississippi rather than the slavery era.

But it’s hard to imagine Dee Rees’ “Mudbound” getting the kind of Sundance embrace that greeted “Birth of a Nation.” Rees’ film is a sweeping saga of two poor families, one black and one white, in Jim Cro- era Mississippi, but its powerful moments are too often swamped by melodrama that undercuts the director’s skills as a storyteller.

Her last Sundance film was “Pariah,” a small and intimate drama about a black teen discovering her sexuality. A precursor of sorts to Barry Jenkins’ “Moonlight,” it showed Rees as a deft chronicler of lives in the margins. Her canvas got bigger in the HBO miniseries “Bessie,” and it gets bigger still with “Mudbound” — which, as Rees said in a post-screening Q&A, juxtaposes the war in Europe with the war back home.

Jason Clarke and Carey Mulligan play a couple who think they’ve bought a farm, only to find that they’ve been swindled and must live in a small house and work the land to survive; grandpa (Jonathan Banks) is a racist and can’t abide the fact that they’ve been placed in close proximity to a black sharecropping family headed by Rob Morgan and Mary J. Blige.

Both families have members fighting in the war, with Garrett Hedlund playing Clarke’s brother, a PTSD-afflicted bomber pilot, and Jason Mitchell playing Morgan and Blige’s son, who’s returned from being a liberator in Europe to find himself “just another n—– pushing a plow.”

The heart of the film lies in the friendship that develops between those two men, with some if the best sequences consisting simply of conversations between unexpected compadres who find themselves missing wartime even as it haunts them.

Elsewhere, Rees manages to mix everything from muscular battle scenes to sly flirtations between Mulligan and Hedlund. But for almost two hours, the ills mount: miscarriage, murder and lots of mud, along with a catalog of indignities visited upon those who commit the crime of not being born with white skin.

And as things get worse for the families, “Mudbound” slowly slides into melodrama, and then into a full-blown Southern Gothic horror show, with a midnight KKK rampage that is shocking and brutal but would be more effective if the film hadn’t been slogging toward overdone dramaturgy for quite a while.

One could argue that with the film premiering one day after the incoming Donald Trump administration deleted a web page devoted to civil rights from the official White House website, these stories are more crucial and essential than ever.

But even with the Eccles crowd giving “Mudbound” a rousing ovation, it’s hard to shake the feeling that Rees is a better and more nuanced storyteller than this.