Oscar-winning director Barry Jenkins showed up at the D23 Expo to talk about what he is working on with “Mufasa: The Lion King,” a prequel to the acclaimed 1994 animated classic and 2019 remake.

Jenkins told the crowd in Anaheim that the movie will tell the story of how Simba’s father rose to become King of the Pridelands, with Rafiki as the narrator. While Mufasa would become a figure of wisdom to his son and to everyone in the Pridelands, he wasn’t destined for greatness and in fact came from a very rough cubhood.

The teaser includes Rafiki’s narration, taking us to the “other side of the light.” He reveals that Mufasa was born “without a drop of royalty in his blood” and was forced to grow up alone. Using the same photorealistic style of the 2019 remake, we see a cub Mufasa struggling to stay afloat on a broken tree branch in a stream before encountering a friendly cub. Could it be a young Scar? 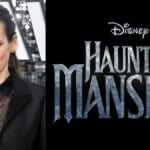 But we don’t get any answers to that, as the teaser ends with Timon and Pumbaa asking why Rafiki is telling a story that they aren’t in.