“The Haunted Mansion” is about to open its doors.

An adaptation of the beloved Disney Parks attraction is headed our way next year, and director Justin Simien was on hand to unveil it at the D23 Expo, across the street from Disneyland. (The attraction opened in 1969 after being teased since 1961. The World’s Fair and Walt’s untimely death slowed things down some.)

Simien used to work at Disneyland and called it “the best summer job I ever had.” He said that when making the movie. “I related to it. I felt like I knew I could make it. I was fanboy, so I understood the ride. I had to make sure all the details and Easter Eggs were there,” Simien told the D23 Expo crowd. And then he showed some footage from the movie and he made good on his promise.

Rosario Dawson stars as a mother who moves her family into a VERY Haunted Mansion. This leads to her calling on a slew of supernatural investigators to help out with the house, including Owen Wilson as a sarcastic priest, Danny DeVito as a local professor and LaKeith Stanfield as a paranormal investigator. There’s a great moment where they’re trying to get into the séance room from the attraction and Wilson pulls on a light fixture thinking that it will reveal a doorway. It doesn’t and he awkwardly hands off the broken light fixture. 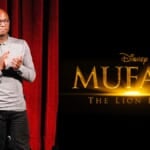 During the footage you saw a host (a ghost host) of familiar Haunted Mansion iconography – Jared Leto is confirmed to play the Hatbox Ghost, the Bride seems to be a big part of the story and Jamie Lee Curtis was on hand to confirm that she plays Madame Leota, aka the floating head in the crystal ball (she appeared in a Doom Buggy, no less).

It looks like the perfect combination of spooky and scary and will delight anyone who has ever been on the attraction or who know about the attraction.

“Haunted Mansion” will scare you silly in the spring of 2023.