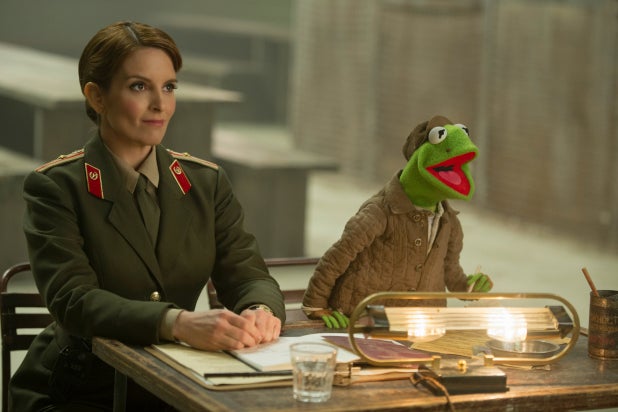 If it’s the fate of rebooted franchises to follow in the footsteps of their predecessors, then let’s just say that “Muppets Most Wanted” puts a fresher spin on “The Great Muppet Caper” than “Star Trek Into Darkness” did to “Star Trek II: The Wrath of Khan.”

Even if the 21st century Muppet features don’t quite reach the pinnacle established while Jim Henson was alive, “Muppets Most Wanted” is often as good as or even better than 2011’s “The Muppets,” which wonderfully relaunched the cinematic shenanigans of Kermit, Miss Piggy, Fozzie and all the felt-covered rest.

This latest chapter picks up precisely where the last one left off, down to featuring stand-ins for the backs of Amy Adams and Jason Segel, who have not returned. Newcomer Walter (voiced by Peter Linz) wonders what’s next, and the rest of the Muppets start singing a hilarious ditty about sequels and doing everything all over again. (Bret McKenzie, the “Flight of the Conchords” vet who scored a Best Song Oscar last time around, provides a new batch of clever and catchy tunes for the Muppets to sing.)

Kermit (voiced by Steve Whitmire) wants his newly-reunited crew to hone their act, but everyone else falls for the sales pitch of one Dominic Badguy (Ricky Gervais) — he insists it’s pronounced “bad-jee” — to tackle a world tour. Badguy’s plan is to replace Kermit with his look-alike Constantine (voiced by Matt Vogel), “the world’s most dangerous frog,” and to use the Muppet tour to cover up a series of crimes across the European continent.

The presence or absence of a facial mole is all it takes to dupe people that Constantine is Kermit, and vice versa, so while Constantine tries to fill Kermit’s emcee shoes (despite the fact that he can’t even say “Kyer-mitt” without an accent), Kermit gets thrown into Constantine’s old cell at a Russian gulag, overseen by no-nonsense Nadya (Tina Fey).

The script, by Nicholas Stoller and director James Bobin (both veterans of the previous movie), is classic Muppets in that it knows when to barrage the audience with gags and when to provide enough plot to keep things moving right along.

Kermit tries to escape the gulag under cover of the prison talent show he’s been dragooned into directing — and if you ever wanted to see Ray Liotta and Danny Trejo perform “I Hope I Get It” from “A Chorus Line,” this may be your one and only chance. Meanwhile, Sam the eagle (voiced by Eric Jacobson), now all too fittingly a CIA agent, tries to solve the rash of continental crimes with Interpol agent Jean Pierre Napoleon (Ty Burrell); the latter being European, he often interrupts the investigation with lengthy lunch hours and extended vacations.

Try to avoid peeking at the IMDB page, since one of the delights of “Muppets Most Wanted” is the cavalcade of celebrity cameos that come fast and furious throughout the film. Wisely, these famous faces never distract too much from the movie’s real stars, and longtime Muppet fans will enjoy appearances by invaluable second bananas like the Swedish Chef (who gets to be at the center of a hilarious Ingmar Bergman reference), Dr. Bunsen Honeydew and Beaker, and boomerang fish-tosser Lew Zealand.

Purists who nit-picked “The Muppets” for moments of hipness or smuttiness or something else that they claimed somehow besmirched the Henson legend will no doubt find some tiny throwaway moment objectionable, but overall “Muppets Most Wanted” remains sensational and celebrational, proving beyond a doubt that these beloved characters will continue to lead a plush life on the big screen for years to come.