One of the oddest relationships you’ll see on screen this year is the one between South African filmmaker and diver Craig Foster and the octopus he befriended while diving in the Great African Sea Forest. That’s the relationship at the heart of the documentary “My Octopus Teacher,” which won the British Academy Film Award on Sunday and is nominated for an Oscar in the Best Documentary Feature category.

The Netflix film is based around footage shot by Foster during the year and a half he spent observing and interacting with a female octopus during daily dives he says he made to rekindle his connection with the natural world. Additional material was shot by co-director Pippa Ehrlich in the astounding underwater landscape that was close to Foster’s house in South Africa. Co-director James Reed shot and conducted extensive interviews with Foster that form the spine of the narrative.

“My Octopus Teacher” was not considered one of the most high-profile docs when it made the Oscar documentary shortlist in February — but it has become a crowd-pleasing sleeper since then, as evidenced by the BAFTA win. Ehrlich talked to TheWrap about the film.

Craig’s experience with the octopus had already taken place when you became involved, hadn’t it?
PIPPA EHRLICH That’s correct. Craig and I had been diving and swimming together for some time, and he’d started realizing that despite the fact that he swore he’d never make another film, his passion had come back and he’d had this incredible experience with the octopus. He knew how transformative it had been for him, and wanted to share it. So he started talking to me about it, and I thought it was an amazing story. But the octopus had died a few years before I got involved.

So did he already have all the footage that he needed? What did you shoot?
All of the footage with the octopus was in the can. He dived with that animal every day for a year. And sometimes he was in the water with his friend Roger Harrocks. He knew that the things he started to see when the animal started hunting in front of him had never been filmed, so he called Roger. And between what he shot himself and what Roger shot, there was a huge amount of footage.

The good thing about living where we shooting is that if there was a shot of Craig we needed, we could wait and get it. 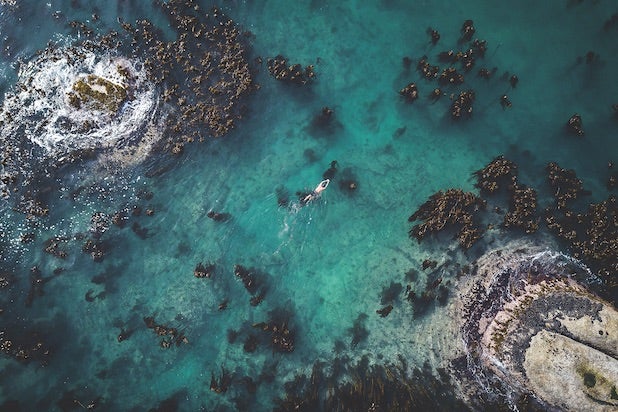 The original idea wasn’t to focus on the octopus, was it?
At first, Craig was trying to make sense of the story to himself. The original treatment that we had was quite broad – it was an amalgamation of many events that had happened over his 48 years of life that had led to a point where he could even think about devoting day after day to learning about the secret life of an octopus.

At first, it included his childhood. The other big transformational experience in his life was making his first film (2010’s “My Hunter’s Heart”), where he spent years in the Kalahari desert learning to track. He was learning about a different way of seeing the natural world and engaging with the natural world. So at first, there was going to be a lot about that in this movie.

And then there were other things we could have included. The kelp forest is a rich ecosystem. There are so any creatures in it, and we had some incredible sequences with sharks and stingrays. But once we got into the story of the octopus, it became clear that the interface between her and Craig was the story we needed to tell.

Also Read: A Guide to Oscar's Shortlisted Documentary Shorts, From the Holocaust to Sophia Loren

One of the questions that always arises with documentaries based around wildlife footage is how much of what we see was actually taking place at the moment that we’re hearing about, and how much was reconstructed from footage that may have come from a different time or place. How scrupulous were you with that?
We were as scrupulous as we could be. For most of that stuff, it would be impossible to film with an animal that was not habituated. There’s just no way an ordinary octopus would be brave enough to act that way in front of a human.

Every once in a while, if we needed a shot of an octopus’ eye or a closeup of a sucker, there might be another octopus involved.

How do you guard against anthropomorphism? That seems almost inevitable when we see animal behavior on screen, because we view everything through our own lens and we can’t really know what animals are thinking.
It’s a question that we asked ourselves the whole way through. This is a very subjective story, and we were open about that. We sat Craig down at his kitchen table and asked him to tell us what he experienced. We’re not making an objective nature film – for the most part, this is Craig sharing his experiences for what he felt and what it meant for him. If there is some anthropomorphism, you have to forgive an individual human for sharing his experience as he experienced it.

And we didn’t name the octopus – that was the first thing we decided, because we knew that anthropomorphism could be a problem. We wanted to give her as much octopus-ness as possible.

We also brought Professor Jennifer Mather out from Canada, and she is an octopus psychologist. She watched every single scene with us, discussed Craig’s interpretation and helped us get inside the mind of an octopus as much as she could. She was able to help us understand that an octopus is a snail that has lost its shell — it’s a very, very intelligent creature that’s also very vulnerable. She told us an octopus’ main experience of the world is the tension between fear and curiosity.

What were the other particular challenges of this film?
Part of it was just getting everything we needed. Sometimes you have to wait a month to get the shot you’re waiting for. We were incredibly fortunate that it was all happening on our doorstep.

Another big challenge is the fact that you’re so immersed in the story and so immersed in the environment. By the time I started working on the film, I’d been diving every day for six months. I suppose you can get so deeply inside it that you can’t see the wood for the trees. That’s why it meant so much that they brought in James Reed, who was a huge help in figuring out how to tell the story.

But beyond that, I’d never done directed before. And we started as a very small team – Craig and I with a pile of hard drives and an edit suite in his attic. You start off making a small film and it seems like everything’s under control. But there were were times I was carrying the film myself, and I felt hugely intimidated and way out of my depth. (Laughs) Delivering to Netflix on your first film is quite an experience, I’ll tell you. It was a big of a baptism of fire.

This story was drawn from an interview with Pippa Erhlich that was done for the upcoming Down to the Wire issue of TheWrap’s Oscar magazine.