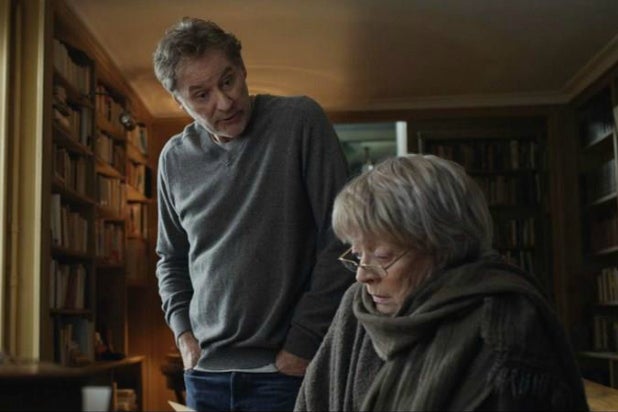 To look at the poster for “My Old Lady,” or to hear its cast and plot synopsis, is to brace oneself for cuteness and whimsy. Kevin Kline as an American who inherits a beautiful old Paris apartment? Maggie Smith as the property’s un-budging nonagenarian resident?

Throw in Kristin Scott Thomas as Smith’s brittle daughter, and you can already imagine the jokes, the arguments, the learning, the loving and the adorability heading your way by the end of 90 minutes.

Except, it turns out, “My Old Lady” is a different kettle of poisson altogether. Veteran playwright Israel Horovitz, making his feature debut as writer-director (adapting his own stage piece), isn’t interested in putting a Gallic spin on crowd-pleasers like “The Best Exotic Marigold Hotel.” The setup might seem familiar and charming, but this film’s payoffs come from unexpected places and require an audience’s willingness to travel down some dark and rocky paths.

When Jim (Kline) — who prefers his nickname to his given “Matthias” — arrives in the City of Lights, he’s a broken man, with three ex-wives and as many unpublished novels in his wake. His overall failure over the course of nearly six decades on the planet makes him the object of any number of barbs from Mathilde (Smith), whom he finds living in the flat that was his sole inheritance from his distant father.

Broke after borrowing the money required to get from New York to Paris, Jim wants to sell the apartment and move on, but Mathilde informs him that she comes with the place because of the French viager system. It’s a complicated bit of bureaucracy, but it works like this: Resident sells property to buyer at a reduced rate, with the understanding that the resident gets to live on the property until death. On top of that, the buyer has to pay the resident a monthly stipend until the resident dies.

None of this comes as good news to Matthias; his presence, in turn, vexes Mathilde’s daughter Chloë (Scott Thomas), especially when it becomes apparent that he has no love for the building’s heritage and would be perfectly happy to sell the lovely property (and its garden) to vulgar hotel mogul François Roy (Stéphane Freiss), whom non-French-speaking Jim refers to as “Wah Wah.”

Horovitz takes this farcical setup, which cinematographer Michel Amathieu (the “Rosemary’s Baby” miniseries) shoots with a maximum amount of Parisian coziness, and flips it on its ear, as the ghosts and regrets of a prior generation make themselves manifest in the relations and negotiations between Mathilde, Jim and Chloë. As truths surface and recriminations are exchanged, the film moves so far past cute and cuddly that all the accordions in the world (Mark Orton’s score dips a bit too deeply in that direction) can’t bring it back.

All for the better, since “My Old Lady” doesn’t really launch until after the gloves come off. We’re left to decide for ourselves how blameless or culpable Mathilde and Jim are for their own states of being and for the misery of others, and Horovitz’s biting dialogue certainly provides substantial evidence for both sides.

Smith, of course, is our reigning champion at playing simultaneously caustic and adorable, and if the film doesn’t offer her any new shadings on a familiar character, she certainly makes a worthwhile evening out of playing the hits. Whenever Kline acts drunk, you know his RANDOM SHOUTING and hy-per-ar-tic-u-la-tion schtick is going to come out and play, but by that point in “My Old Lady,” he’s already crafted a fully formed character, all the more fascinating for his flaws.

Kristin Scott Thomas once again shows off her confident command of French, and while she’s saddled with some of the movie’s more conventional moments, she sells them with a pro’s confidence.