Osaka, 23, had returned after sitting out Wimbledon and pulling out of the French Open to attend to her mental well-being.

Osaka, who had advanced with an easy two-set win in her opening match and a walkover in the second round, struggled on Friday night, falling to the 18-year-old Fernandez 7-5, 6-7 (2-7), 4-6. 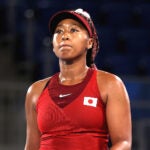 Osaka’s frustration was evident at times, as she slammed her racket to the court twice and separately tossed her equipment onto the court.

Osaka, the No. 3 women’s tennis player, withdrew from the French Open in May after she was fined for skipping post-match press conferences. In explaining her decision, she cited her mental health, saying, “I’ve often felt that people have no regard for athletes’ mental health and this rings very true whenever I see a press conference or partake in one. We’re often sat there and asked questions that we’ve been asked multiple times before or asked questions that bring doubt into our minds and I’m just not going to subject myself to people that doubt me.”

Following her withdrawal from the French Open, Osaka took a break from major tennis events, including Wimbledon. She returned for the Olympic Games in Tokyo, where she represented Japan but lost in the third round to Marketa Vondrousova of the Czech Republic.

She also played last month in the Ohio WTA tournament, where she made headlines after becoming visibly emotional when a Cincinnati Enquirer sports columnist asked her about her fraught relationship with the media.

Osaka’s agent, Stuart Duguid, lambasted the Enquirer reporter Paul Daugherty as a “bully” who displayed “really appalling behavior” in a statement given to E! News.

Madeline Roth contributed to this report.