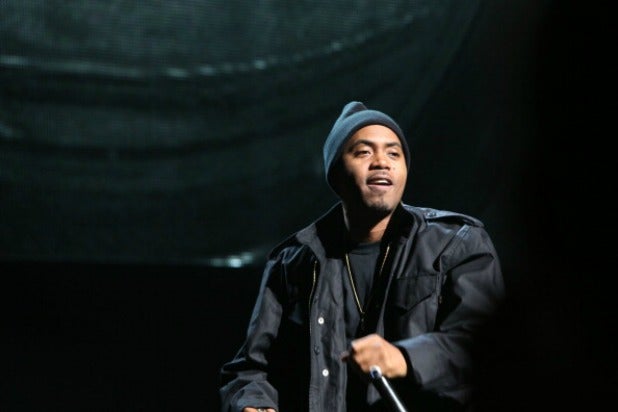 After 20 years, the mainstream embraced Nas at Wednesday night’s start of the Tribeca Film Festival. He embraced it back by abandoning the casual homophobia that some critics have used to write off hip-hop as a means to progress.

Nas’ “Illmatic,” the classic 1994 hip-hop album that was the subject of the first film at the festival, holds up extraordinarily well: the lyrics and delivery are complex but precise, the beats grounded and grimy but fluid enough for moments like a stirring trumpet solo by Nas’ jazz musician father.

Lots of ’90s hip-hop sounds amusingly dated, with references to pagers and labels no one wears anymore. But what stands out most glaringly — even in some albums by the music’s most conscientious artists — is casual homophobia. The rap of 1994, like the movies, marriage laws, and pro sports, tended to be at best dismissive of gay people.

“Illmatic” is a long, long way from the most homophobic rap recording. And “Time Is Illmatic,” director One9’s excellent documentary about the album, methodically captures the poor, violent environment that created it, the Queensbridge Housing Projects. It puts the album’s blunt language in perspective.

But one passage, from the clever, playful “Halftime,” still jars the ear: “I got to have it/I miss Mr. Magic/Versatile, my style switches like a faggot/But not bisexual, I’m an intellectual.”

Nas commandingly performed the entire album at the end of Wednesday’s screening. As he has at live shows in recent years, he cut the offending lines. Sometimes, his hype man has shouted the rhymes as Nas went silent. But on Wednesday, he performed with just a DJ, Green Lantern, and let silence fill the space once occupied by casual homophobia.

It was important because this wasn’t just another festival date: It was a 20-year retrospective on one of hip-hop’s most respected albums, and it appeared to be his only significant revision.

It would have been a very strange thing to see him rap the lyrics in 2014, at the Upper West Side’s lush Beacon Theater, before an audience made up of people from an industry that bends over backwards to prove its progressive credentials.

Wednesday’s screening brought together two audiences: the film types did the usual glad-handing in business casual. Some of the hip-hop crowd wore baseball caps and T-shirts, and ooooohed along as the film recounted a 30-year-old rivalry between Queensbridge and the South Bronx. They cheered the hip-hop icons who appeared onscreen and in the audience, including Q-Tip, Pete Rock, DJ Premiere, MC Search, Large Professor, Kool Herc, and Eric B.

Nas appealed easily to both, thanking festival co-founder Robert DeNiro for playing him in the movies.

Dropping the gay lines avoided a distraction from the film’s most powerful point: As much as hip-hop is blamed for societal problems, it can also be a forceful solution. In one of the film’s most powerful moments, Nas looks at a mid-’90s picture of himself with more than a dozen African-American men, and recounts how many of them are dead or in jail. The film talks about how prison sentences, handed down disproportionately to black men, destroy families.

The film also shows how good parenting helped an artist emerge from the projects. Nas’ parents stayed together for most of his childhood. The audience cheered as he credited his mother with raising him and his brother right. And his father provided a library that included books from “The Invisible Man” to “The Art of War” to The Bible.

“Illmatic” has become a kind of hip-hop Bible. Every few seconds you hear a much-sampled or repeated line and realize with shock that this is the first time anyone said it. And like the Bible, “Illmatic” is a document full of important messages, interrupted by an occasionally terrible ones. Nas’ isn’t so much revising history as continuing his artistic evolution. If only the Bible could be so easily updated.

Jay-Z built one of the greatest feuds in rap history out of questioning Nas’ street credibility, and that’s what the gay debate has always gone back to. Hip-hop equated homosexuality with softness, and softness with homosexuality.

See exclusive photos: Melanie Lynskey, Anna Camp, Heather Graham and the Ladies of ‘Goodbye to All That’

With “Time Is Illmatic,” Nas makes no pretensions of being a hood. When his childhood best friend, Willie “Ill Will” Graham is shot, Nas and his brother don’t get guns and look for payback. They’re horrified at the waste of life. Nas throws himself into music and celebrates Graham’s memory with “Illmatic.”

The grating lyric about bisexuals might cause us to miss the next, more important one: a rapper proudly calling himself an intellectual. Nas is a reader, a poet, a musician who doesn’t think it’s soft to have his dad play trumpet on his album.

On Wednesday, that was what stood out. The lyrics about gays added nothing, and now they’re gone.