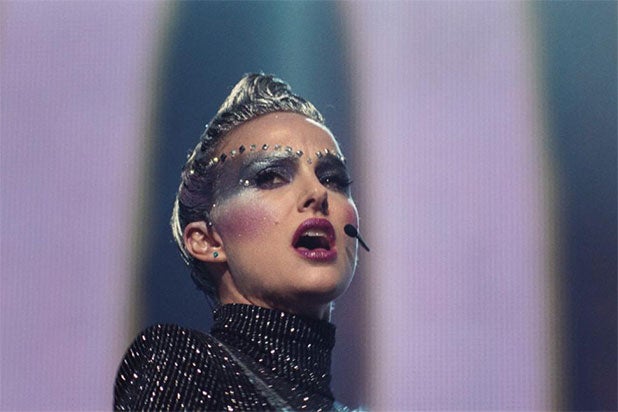 Brady Corbet’s “Vox Lux,” with Natalie Portman and Jude Law, and Neil Jordan’s “Greta,” with Chloe Grace Moretz and Isabelle Huppert, are among almost 50 films that have been added to the lineup of the 2018 Toronto International Film Festival, TIFF organizers announced on Tuesday.

The two films have been added to the Special Presentations program, with “Greta” having its world premiere at TIFF and “Vox Lux” its Canadian premiere.

“Greta” features Moretz as a young woman in New York who befriends a widow who turns out to have sinister intentions; “Vox Lux” is a musical drama that encompasses the life of a woman who achieves success after a tragic childhood.

Toronto also announced its Discovery program, which is devoted to up-and-coming filmmakers. The 46 films in the lineup come from 37 different countries, and include “Girl,” Belgian director Lukas Dhont’s story of a transgender teen that made a big impact in Cannes this year; Adina Pintilie’s “Touch Me Not,” which won the Golden Bear and the best first feature award at this year’s Berlin Film Festival; and Adewale Akinnuoye-Agbaje’s “Farming,” with Kate Beckinsale.

TIFF also announced that Indian-American director Mira Nair has joined Bela Tarr and Lee Chang-dong on the Platform Prize Jury, which will award a $25,000 prize to the best film that that section of the festival. And it revealed free events that will take place on King Street West (“festival street”) during the opening weekend of the festival, as well as a series of speakers who will participate in screenings of the TIFF films “Birds of Passage,” “Donbass,” “I Do Not Care if We Go Down in History as Barbarians,” Look at Me,” “The Other Story” and “The Public.”

The new additions bring the total number of films heading to Toronto to 343, 255 features and 88 shorts. Of those, according to a festival fact sheet, 138 are world premieres.

The selections represent 83 countries, and 34 percent of them are directed by women.

They were chosen from 7,926 total submissions, about 600 more than last year.

The 43rd Toronto International Film Festival will begin on Sept. 6-16.