This article about Natalie Portman first appeared in the Actors/Directors/Screenwriters issue of TheWrap’s Oscar magazine.

As tortured artists go, Natalie Portman’s Celeste in “Vox Lux” is about as tortured as you can get. Brady Corbet’s bold and twisted drama focuses on two periods in the life of a young pop idol: her teenage years, when she survives a school shooting and becomes a star after writing a song to mourn her lost classmates, and a tumultuous day some 18 years later, when she prepares for a hometown concert but is a drunken wreck in a stormy relationship with her teenage daughter.

Raffey Cassidy plays the young Celeste, and also the older Celeste’s daughter, while Portman delivers a fierce, assaultive performance as a woman whose childhood wounds and toxic experience with fame have made her a dysfunctional diva for the ages.

“I was blown away by Brady’s ability to write characters and to really reflect this crazy moment we’re living in,” Portman said of the script by Corbet, an actor turned filmmaker. “It has the violence and the glamour and the quick-moving pace, and it also speaks to the larger question of our media, what the purpose of pop culture is and the ways we pay attention to things. And it has these characters who spout nonsense but also have real insight, to the point where you get confused which is which.” 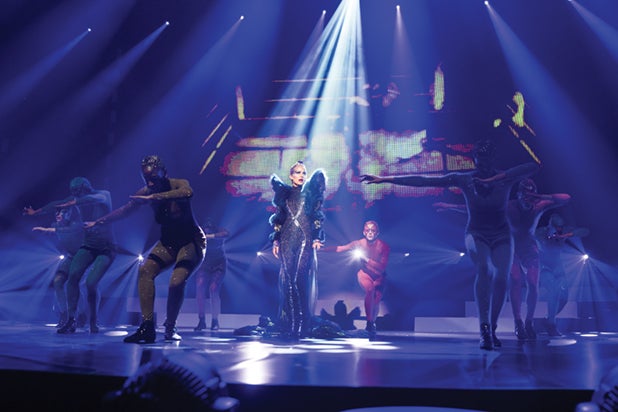 Portman’s Celeste is, perhaps, longer on the nonsense than the insight; she’s a ferociously damaged teen star trying to make a comeback after an unseen but no doubt stormy two decades of trouble. For Portman, who became known in Luc Besson’s “Léon: The Professional” and worked with Michael Mann, Woody Allen, Tim Burton and George Lucas before she finished high school, the saga of a child star got her attention.

“I don’t usually make connections between myself and my characters, because it always feels dangerous,” she said. “But I do think it’s something I’ve been very interested in because of my personal experience of the separation between the public and the private. We all play different roles in different situations and have different selves in public than we do in private. And that’s only exacerbated if you’re a public person.”

At Corbet’s urging, Portman and Cassidy did not try to work out any mannerisms that would remain constant from the young Celeste to the older one. “Brady really wanted it to feel like two different people, which would automatically lead you to imagine what happened between the first and the second part,” Portman said. “We can all fill that in from every rising-star movie that we’ve seen, or from the real-life stories of what happens to these girls who become pop stars as teenagers.”

The entire movie was shot in 22 days, with Portman’s scenes taking up only 10. “It was very intense,” she said. “I prepped with the choreography and the singing and the dialect so I was ready to go, but it was definitely a leap of faith to dive in.” To make things even more intense, Corbet filmed the offstage scenes — some of them as many as 10 pages long — in single, extended takes. “It was great in terms of freedom and creativity,” she said, “but it really required everyone to be on top of their game.”

While Portman’s section of the film is in many ways a long, ugly downward spiral, the movie climaxes with an elaborate, extended concert sequence. Portman has had experience with films in which character beats must be revealed in performance — her Oscar-winning turn in “Black Swan” being the most notable — but “Vox Lux” presents a tortured artist who is tortured least when she’s on stage.

“To me those scenes were tricky, because they happen right after this very dramatic, hitting-rock-bottom scene,” she said. “I kept asking Brady, ‘How much of that do you want me to be showing? Would the audience be able to tell that she’s just had this moment?’ And he really wanted it to be as if they couldn’t tell — that she really can pull herself together.

“That gave me a lot of insight into the character. She’s clearly most at ease and most in her own skin when she’s performing. She’s authentically joyful. And that’s emblematic of the line in the film when Celeste says, ‘I don’t want people to have to think too much, I just want them to feel good.’ It’s a moment where you’re allowed to indulge in pop.”