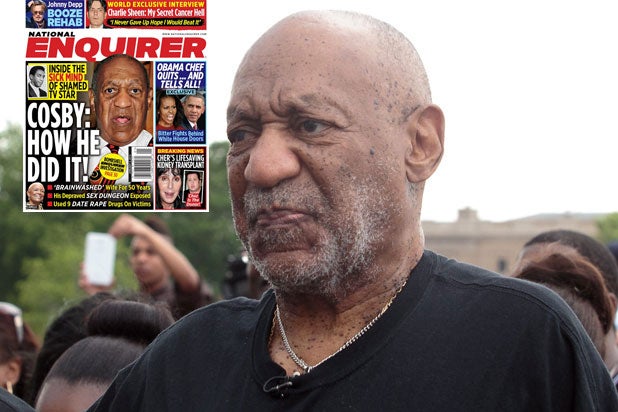 The National Enquirer has responded to revelations in the 2005 Bill Cosby deposition that suggest it killed a negative story on the TV legend in exchange for him granting an exclusive interview.

The tabloid’s response to questions that it scrapped a story on Cosby accuser Beth Ferrier was to not address the questions at all.

“The National Enquirer, more than any other publication, was unflinching in our aggressive coverage of allegations against Mr. Cosby beginning in 2000 when everyone else avoided the story,” an American Media Inc. spokesperson told TheWrap. “We continue to remain aggressive in our reporting today and stand by the integrity of our coverage of this story which we have taken the lead on for more than a decade.”

Ferrier claimed she was in a consensual relationship with the comedian in the mid-1980s. However, she said the relationship soured when he allegedly drugged her coffee and she awoke in a car.

In the deposition for a civil suit brought by another accuser, Cosby was asked about his knowledge of Ferrier’s interview with the Enquirer.

The plaintiff’s attorney, Dolores M. Troiani, asked Cosby: “Did someone read to you Beth’s story that she had given to the National Enquirer?”

Troiani then pressed further, asking: “When was that?”

Cosby answered: “That was before it was supposed to come out.”

The documents go on to state: “Defendant testified that he was given the Beth Ferrier story, which was pending publication in the Enquirer for his review. It was his reading this story which prompted him to make the deal with the Enquirer to print his story, instead.”

The deposition reveals Cosby’s lawyer, Marty Singer, made a deal with the tabloid to “give an exclusive interview to the National Enquirer in exchange for their agreement not to print the Beth Ferrier story.”

When pressed further on whether it spiked Ferrier’s interview in order to get a Cosby exclusive — and showed Cosby a damaging story about him ahead of publishing it — the Enquirer spokesperson did not respond.