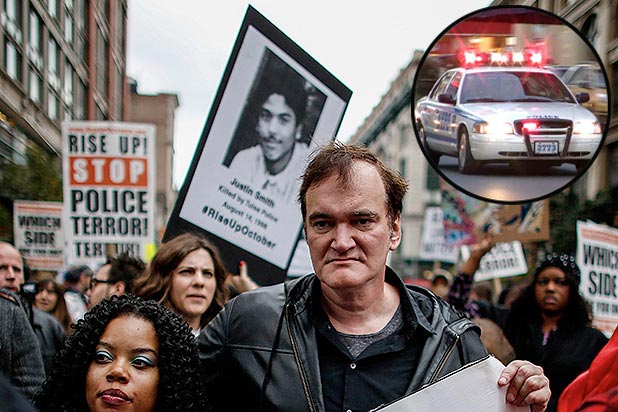 The National Association of Police Organizations on Tuesday rejected Quentin Tarantino‘s efforts to clarify his comments about police brutality, calling the director’s explanation “ludicrous” — while another police union told TheWrap its boycott of Tarantino’s films was still on.

“He makes his living as a master craftsman of scene and setting, for him to claim now that he wasn’t perfectly aware that his message was precisely ‘cops are murderers’ is ludicrous,” NAPO executive director Bill Johnson told TheWrap.

“He has the financial means and freedom to promulgate his message anywhere he wants; and by deliberately choosing New York City while a family is preparing the funeral for their slain police officer son is an extraordinarily low and mean gesture, one he ignores in today’s statement,” Johnson said. “Even Al Sharpton ultimately had the grace to not interfere with the funeral. I didn’t think it was possible to exhibit less class than Al Sharpton but Mr. Tarantino managed to do it.”

Meanwhile, the national office of the Fraternal Order of Police told TheWrap the organization is maintaining its boycott of Tarantino’s forthcoming Weinstein Company release “The Hateful Eight,” due in theaters on Christmas Day in limited release.

On Tuesday, Tarantino told the Los Angeles Times “all cops are not murderers” in an attempt to quell the boycott — which includes police groups in Los Angeles, New York, Philadelphia, Chicago and national chapters representing sworn peace officers.

While the Oscar-winning filmmaker insisted he was “not a cop hater,” he declined to apologize for comments made at an Oct. 24 anti-police-brutality rally in New York City that he believes have been misrepresented. “I’m not taking back what I said. What I said was the truth. I’m used to people misrepresenting me; I’m used to being misunderstood,” he said. “I’m not being intimidated.”

But police groups do not seem to be appeased by Tarantino’s efforts to walk back his comments. “All of the sudden, he’s really not a cop hater, but at the same time we’re trying to intimidate him?” Jim Pasco, the FOP’s executive director said. “So now, he’s a victim of the cops he doesn’t hate?”

“It’s a strategy,” Pasco added. “He’s got the best crisis and PR people money can buy. The only thing missing from his formula in sincerity. He’s not a credible person. This isn’t the first time he’s outraged a segment of the public, he knows at the end of the day this PR will be good for him. He’s selling a movie.”

When asked if the FOP would continue to support a “Hateful Eight” boycott, Pasco simply said, “yes.”

Tarantino participated in an anti-police brutality rally in New York on October 24. The filmmaker angered police on both coasts when addressing a crowd of protesters at the rally in Manhattan’s Washington Square Park.