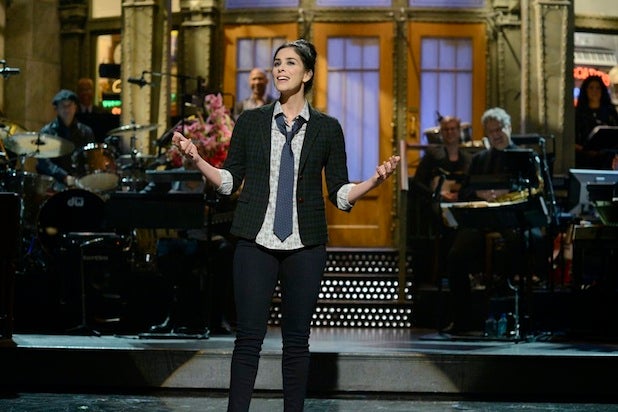 She’s a comedienne (and a great one at that, as she reminded the audience a few times) and delivered a fun, natural opening monologue. Silverman quickly took the opening into the audience and sat in the lap of an unsuspecting woman in the front row. There’s no way, judging from the woman’s reactions, that this was a plant. And sure, it could’ve gone very wrong but Silverman set up the jokes so there was nothing the audience member could do to sink them. She only had to act naturally to Silverman’s prompts and it clearly worked. Point, Silverman.

Returning to the stage, Silverman reminded us that while this was her first time hosting, it wasn’t her first time in Studio 8H. In the ’90s, she was a “featured player” and often acted as the audience plant — genius move right after showing how unnecessary a plant was if you’re smart about it. She then takes it to a new level by answering questions posed by her videotaped past self on “SNL.” The questions are all out of context, which just adds to the hilarity of the idea, because Silverman really tries to answer the questions.

“What is this? Pretty girl in the audience night?” she asked after fielding a couple questions from ’90s Sarah.

As for sketches, the show front-loaded the best stuff. There was a parody of “The Fault in Our Stars” in which Sarah played the dying girl, this time with ebola. That makes it really tough for the guy to fall in love with her while forgetting her disease. But we’re talking about a teen boy and while kissing makes him squeamish, sex becomes something he’s into despite the deadly disease. “Just the tip?” he asked a school counselor.

“SNL” then launched into a tribute to Joan Rivers. It’s heaven and the revered comedienne has just arrived. There’s certainly a question in my mind that it may be too soon. But, who best to play Rivers than Sarah Silverman, a comedienne Rivers liked and who was also a member of the dais on Rivers’ Comedy Central roast? She’s practically got Rivers’ blessing. Silverman tripped over several of the jokes as she imitated Rivers’ raspy voice and machine gun delivery, but that too seemed a nice way to say Rivers is a tough act to copy.

Of the best sketches of the night was an ensemble one in which Silverman and the Caucasian members of the cast endearingly declared that they were going to make the most of the short time left in which white people ruled the world. They’re going to “camp… and hike…” until the Mexicans take over in “2050 or 2060 at the latest.” Very funny.

Another standout sketch for Silverman wasn’t that funny, but cast her in a trio of singers who sang on a river boat cruise. They vibed to Tina Turner and each took turns explaining the awful circumstances that landed them the awful gig. It wasn’t so much funny as entertaining to see that Silverman has some singing skills.

Weekend Update was at its best with back-to-back stories of the ebola breakout. New anchor Michael Che and Colin Jost hilariously pointed out all the strangest aspects of the U.S.’s first documented case of ebola being a man from Texas, making fun of the state’s outdated teaching and local icons like Barbara Bush.

“Who goes to Texas and Africa?” asked a confused Che.

As the musical guest, Maroon 5 was on point and timely. The appearance caps off a week in which the group was called out for romanticizing stalkers in the video for its new song, “Animals.” Well, they performed the song with reckless abandon. And frontman Adam Levine even took part in a couple of sketches.

Overall, the episode wasn’t a home run, but it certainly reached third base several times. Next week, Bill Hader returns to host after leaving the show and we have high hopes for that episode.

Watch “SNL’s” tribute to Joan Rivers in the video below:

Watch the “The Fault in Our Stars” parody: