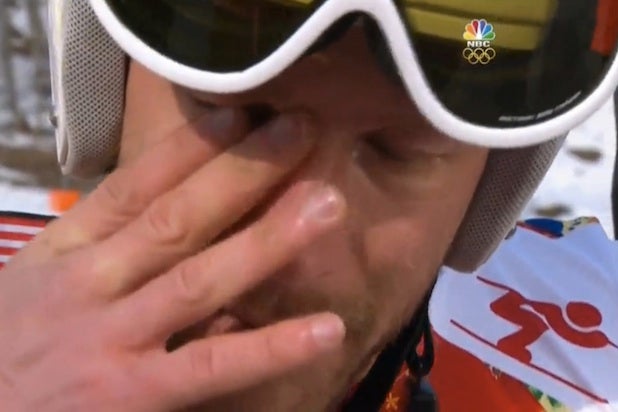 After Olympic alpine ski racer Bode Miller won the bronze medal for the Super-G event in Sochi, NBC Sports reporter Christin Cooper peppered him with questions about his brother Chelone — nicknamed Chilly –who died of a seizure last April.

“Bode, you’re showing so much emotion down here,” Cooper said. “What’s going through your mind?”

“I know you wanted to be here with Chilly experiencing these games,” Cooper continued. “How much does it mean to you to come up with a great performance for him? And was it for him?”

“I mean, I don’t know it’s really for him,” Bode sniffled. “But I wanted to come here and uh — I don’t know, I guess make my self proud.”

Bode struggled to continue with the interview, visibly distressed.

“When you’re looking up in the sky at the start, we see you there and it just looks like you’re talking to somebody,” Cooper observed. “What’s going on there?”

At this point, Bode began to visibly break down and sob. Cooper said she was sorry, but NBC cameras continued to film as Miller wept.

Watch Bode break down as Cooper questions him about his dead brother: