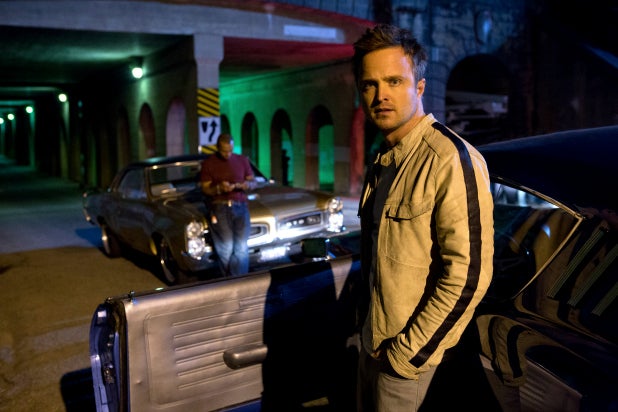 Star vehicles are not a one-size-fits-all proposition. Certain lines of dialogue, characterizations, even camera angles that might be fitting for one actor will be thoroughly ridiculous for another.

The many, many problems of “Need for Speed” can’t be blamed on the miscasting of Aaron Paul in the lead role — and, in fact, there’s not an actor out there who could have saved the thing — but Paul’s presence in the film certainly isn’t helping.

A memorable and eccentric presence on “Breaking Bad,” Paul feels awkward and uncomfortable here: his round, baby face doesn’t loan itself to the intensity that director Scott Waugh (“Act of Valor”) is clearly desperate to achieve, and perhaps it might have occurred to someone that an actor best known for playing a manic motormouth might not have been the best choice for a character who’s supposed to be haunted and brooding.

In this idiotic adaptation of the popular video game, Paul stars as Tobey Marshall, a talented driver currently trying to keep the doors open on his late pop’s garage, a body shop so generically vintage that it looks like a feature of the “Cars” section of Disneyland. Tobey’s having a hard time paying the mortgage, despite the fact that he and his ethnically-diverse crew have both a slew of vintage racers and any number of high-tech tracking devices (including, no kidding, an airplane) used to monitor their local drag races.

When the dastardly Dino Brewster (Dominic Cooper) comes back to town after having raced at Indy, offering big money to Tobey and his guys to create a one-of-a-kind Ford Mustang, Tobey takes the gig. (The movie goes from a handshake to a completed car without a montage or even a wipe in between. If only the 130-minute “Need for Speed” had always stuck to such economical storytelling.)

When Tobey shows up Dino by getting the Mustang up to 190 mph, Dino challenges Tobey to a street race that winds up costing Tobey’s pal (and Dino’s girlfriend’s brother) Pete (Harrison Gilbertson) his life. It’s in this first, deadly drag race that “Need for Speed” makes us appreciate the “Fast and the Furious” franchise that it is trying so hard to emulate; in the “Fast” movies, there may be some close calls, but we don’t find ourselves actively concerned about the well-being of any nearby pedestrians.

All the drivers in “Need for Speed” — heroes and villains alike — are total jerks on the road, oblivious to the welfare of homeless people, bicyclists, commuters, even school buses, either ignoring or even, in some cases, chuckling over the destruction they leave in their wake. It’s hard to root for such patently irresponsible creeps.

Anyway, Dino frames Tobey for Pete’s death, Tobey goes to jail for two years, and when he gets out, he swears revenge, which involves racing Dino in a big annual illegal race where the winner gets to take home all of his opponents’ high-priced cars. (It doesn’t seem like that great of a prize, since apparently all the vehicles wind up either wrecked or impounded by the cops by the time it’s over, but hey, whatever.)

Entering the race involves Tobey getting the crew back together, driving cross-country and unconvincingly falling in love with car expert Julia (Imogen Poots) and attracting the attention of eccentric rich race organizer, Monarch (Michael Keaton, who apparently pocketed a big check for sitting in a room and giving us a third-rate impersonation of Cleavon Little in “Vanishing Point”).

Car fetishists will undoubtedly enjoy the many loving shots of some of the world’s most expensive automobiles, but they’re about the only demographic that’s going to come away from “Need for Speed” satisfied.

The racing scenes are uninspired, screenwriter George Gatins’ dialogue is flat and the performances are forgettable. Waugh’s only innovation is to strap a Go-Pro camera onto cars that are flipping over — but after the first two or three of these loop-de-loop POV shots, the effect loses its charm.

Based on his star-making TV work, Paul has a career ahead of him as an actor, but this role represents a complete miscalculation of his talents and the kind of films he should be pursuing. Also spinning her wheels here is Imogen Poots, a talented comic performer who deserves better than movies like this and “That Awkward Moment.”

“Fast and the Furious” fans have one more year to wait before Jason Statham tears up the streets of Tokyo looking for Vin Diesel, but “Need for Speed” fails as a place-keeper — or, for that matter, as a possible usurper — of that other, better franchise.