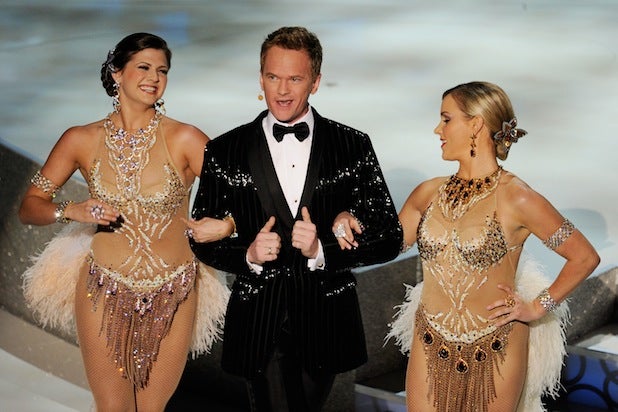 We all knew this was coming, right?

Ever since Neil Patrick Harris became the go-to host for the Tonys and the Emmys, and ever since Hugh Jackman showed that an actor with musical-theater experience can be an ideal host for the Academy Awards, Harris and the Oscars were on an inevitable collision course.

It wasn’t a matter of if he would host the Oscars – it was just a matter of when. And it was a question of whether the Academy and the show’s producers would want to wait until he was more of a movie star, and whether they’d want to put a little more distance between his hosting gigs on those other shows, to make it look a little less like the Academy is a follower.

They even teased us a few times, including 2010, when Harris did an opening number on the 82nd Academy Awards before turning the show over to Steve Martin and Alec Baldwin. (photo at top)

And year after year, as Martin and Baldwin fell flatter than expected, as Anne Hathaway and James Franco and Seth MacFarlane bombed, as Billy Crystal and Ellen DeGeneres seemed a little too been-there-done-that, Harris popped up on other awards shows to remind us that he could probably be a great Oscar host, if only he wasn’t such a TV and live-theater guy.

So now his turn has come. Harris will host the 87th Academy Awards next February, AMPAS and producers Neil Meron and Craig Zadan announced on Wednesday. And the initial reaction in many quarters was probably well, of course he will.

After all, the Oscars have a pair of TV and live-theater producers, Meron and Zadan, doing their third consecutive Academy Awards. (Yes, they’ve done movies, too.) The TV network that airs the show, ABC, seems to be calling more shots than it used to. And honestly, does anybody really care that Harris hosted the Tonys five months ago, the Emmys a year ago, “Live with Kelly and Michael” two years ago?

Of course not. This is the era when everybody is everywhere, if you want them to be. This is a time when the ratings bump that might come from Neil Patrick Harris finally hosting the Oscars is more valuable than the air of exclusivity that comes from insisting that only real movie stars can host the show.

(Anyway, that exclusivity went out the window when Johnny Carson, Ellen DeGeneres, Jon Stewart, Seth MacFarlane and a bunch of others took the gig.)

And because he’s in David Fincher’s “Gone Girl,” the hot movie of the moment, Harris even has a far stronger claim to being a movie star than ever before. (Never mind that he’s the most annoying part of “Gone Girl.”)

Can Harris do a great job at the helm of the Oscars? Yep. He’s got the skills to do it, unquestionably. He can sing. He can dance. He’s funny.

He knows how to work a room, and probably won’t be intimidated by the star power in the front rows and the difficulty of playing to a crowd that fills up with losers as the night goes on. He’s proven himself to be quick on his feet doing other awards shows.

He doesn’t have the movie-star clout that Jackman brought to the gig in 2009, in what was by far the best Oscar show of recent years. But he’s got a similar toolkit, if you substitute a bit of charm for some of Jackman’s charisma.

And to be honest, the pressure is less on Harris than it is on Meron and Zadan, who presided over a terrible Oscar show in 2012 and a pretty good one in 2013. They have to give their host things to do that make sense, and things that tie into the movies they’re honoring.

We don’t want to see Harris doing a medley of songs from a 30-year-old musical, though I’m sure he could knock “Let’s Hear It for the Boy” out of the park. We don’t want a meta opening number about the act of putting on an Oscar opening number. (Harris veered into this territory at this year’s Tonys.) We don’t need him to order pizza for Michael Keaton, pose for selfies with Benedict Cumberbatch or do a medley like Billy Crystal.

We want the guy to engage with the movies of 2014, to have fun with the pomp (and pompousness) of the event, to take the Oscars down a peg or two even as he elevates them with his giddy show-must-go-on Neil Patrick Harris-ness. We need him in a show that walks that fine line — let’s face it, that often impossible-to-walk line — between glitz and good sense, between honoring the best of cinema and glorying in the silliest of spectacles.