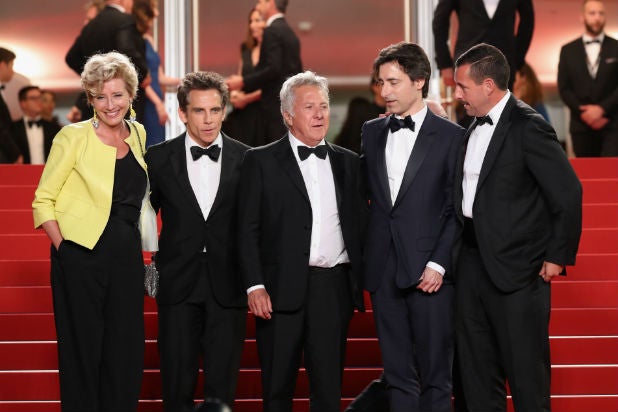 The talk of Netflix is everywhere in Cannes. Not Netflix per se, though also that, but more significantly the changes coursing through the entertainment industry and manifesting themselves at the film festival: the rise of the streaming services, the sheer volume of content being produced and the magnetic appeal these new services have for leading artists in film.

Director Noah Baumbach (“The Meyerowitz Stories (New and Selected)”), Spike Lee (“Rodney King”), Bong Joon-ho (“Okja”) are all here in Cannes, all with films that they’ve made for Netflix. At the press screening of Baumbach’s film at 8:30 on Sunday morning, the curmudgeons still hissed and booed at the sight of the red Netflix logo when it rolled across the massive screen, just as they had done when Netflix’s other competition entry, “Okja,” had screened two days earlier.

But the filmmakers are voting with their feet and so are the actors. As a community they are lined up making television and film projects at Netflix, Amazon and increasingly Hulu, and nothing done by the guardians of Cannes – who want movies seen on big screens first and if possible exclusively – is going to stop them.

Many filmmakers say they cherish the freedom they are given at the less top-down (and probably overwhelmed) streamers, even if the money they make is notably less. (Studios aren’t paying what they used to, but they offer back-end residuals, which Netflix cannot.)

For the moment, the trend is going to continue. Now that veteran Universal-based producer Scott Stuber has gone to Netflix to run its moviemaking division, even more talent will migrate there. The indie film veteran Ted Hope’s presence at Amazon Studios has already had a similar confidence-building impact among artists.

In a heated discussion among a group of producers, financiers and directors on Sunday, the pros and cons were debated. Among business-minded folks, a broad consensus has been building for some time that Netflix and Amazon are living in a bubble of their own making, gorging on making content at an unsustainable pace.

One well-respected insider said that Wall Street is not measuring Netflix or Amazon by normal profit and revenue standards, so the stock is flying high on numbers like subscriber growth rather than, say, ebitda. Once that euphoria has faded, he and others predict, the streaming companies will not be able to spend freely on content the way they do today. Another noted that the role of a film festival like Cannes is to embrace all strands of the filmmaking art, whether from countries around the world, or short, medium and long works or stories told on non-traditional platforms. (But it did raise the question of how long these events should be called “Film Festivals,” when so many include other forms of story-telling.)

For his part, Stuber, who took over the job of running Netflix’s movie division earlier this month, said that he is aware of the coming pitfalls in the Netflix business model. Standing in the garden of a Cannes villa for a Netflix blow-out party on Sunday (the kind big studios used to throw), he described a coming approach in which the movie studios function more like a streaming business, and the streaming business functions more like the studios. He hinted that the windows holding back major movie content faces imminent demise, a move that Netflix will have to respond to competitively as well.

For the moment, Netflix is the star of the Cannes show. Off to one side, a boyish Baumbach basked in the afterglow of his premiere at the Grand Lumiere theater, the kind of experience a filmmaker lives for. Greta Gerwig and Julianne Moore gabbed at the stone table with Lisa Hoffman, while Dustin Hoffman took congratulatory greetings from all and sundry.

Hoffman wept openly at the ovation he received at the premiere. At the party, he described the wonderful but painful process of bringing forth Harold Meyerowitz, an obsessively narcissistic sculptor whose sons (Ben Stiller and Adam Sandler) struggle to escape him, or at least understand his hold on their lives. Hoffman said his son called it “comedy used as a weapon.” Stiller described the emotional wallop of seeing the film at the premiere after having finished it many months ago.

And there at the front entrance to the Gatsby-like villa stood Ted Sarandos like a proud papa. He is visibly unperturbed by the fuss his company has created at the festival, and seems both determined and focused to continue his and CEO Reed Hastings’ ambitious strategy.

But there was no doubt that Sarandos too was moved by the experience of seeing “Meyerowitz” on the massive screen. So, perhaps, there will always be Cannes, for all of us.