The aura around Netflix, long the darling of Wall Street and binge-loving consumers, may finally be fading.

It’s been a rough 24 hours for the streaming giant, with projections of low growth in Q1 earnings hitting its stock price hard.

Exhibitors have largely declined to work with Netflix, which has pressed for simultaneous theatrical and at-home releases of movies such as Cary Fukunaga “Beasts of No Nation.”

“The chickens are coming home to roost,” one streaming executive told TheWrap, speaking on the condition of anonymity. “What they’ve done up to this point in feeding their service and growing subscribers is remarkable, but how sustainable is it?”

Late Sunday, Amazon Prime Video broke out its growing service as a standalone monthly subscription for $8.99 a month — a buck cheaper than Netflix and a welcome move to jettison the pre-existing $99 Prime fee which many consumers paid to guarantee two-day shipping on all retail orders.

It was the prologue to Netflix delivering its own bad news. Despite a strong start to the year, the company predicted that its growth in new U.S. members would barely inch higher this spring, and subscriber sign-ups overseas would actually be weaker than they were last year.

Before the tumble, Netflix’s stock had climbed by about a third in the last year. By comparison, similar companies have seen their share values slither lower — Disney shares have fallen 6 percent from a year ago while Viacom’s are a down stomach-turning 45 percent. 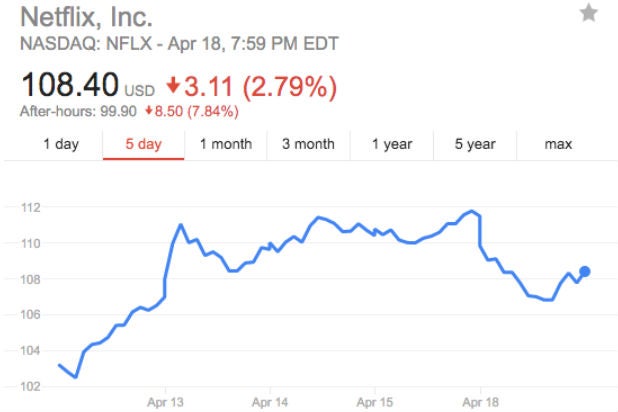 On top of Wall Street woes, it’s been rough seas for Netflix within the industry.

In addition to streaming, the company competes with Amazon Studios in the production and acquisition of feature films. While Netflix’s 2015 maiden voyage with “Beasts” was met with boycotts from major North American theater chains, Amazon wined and dined exhibitors to great effect at last week’s CinemaCon.

Amazon Studios Motion Picture Head Ted Hope and Marketing and Distribution President Bob Berney threw a luncheon at Caesar’s Palace that showcased footage from its hot Sundance acquisition “Manchester by the Sea” and Woody Allen‘s buzzy new period comedy “Cafe Society.” Most importantly, they delivered a loud promise to get bodies into the cineplex.

“All films will be released theatrically, with an aggressive marketing campaign to bring audiences to your theaters,” Berney said.

Netflix was not present at the convention sponsored by the National Association of Theater Owners, which blasted the release of “Beasts” as a public relations stunt and grab for awards attention when it opened last October on 31 screens the same day it was available to download.

“Very few theaters will show ‘Beasts’ because frankly it’s there for PR purposes. Maybe to get an Academy Award nomination,” NATO spokesman Patrick Corcoran told TheWrap at the time. “[Theaters] are looking for a distribution partner who is serious and committed to supporting releases with exclusivity and marketing. It was clear Netflix was not being serious.”

Netflix’s strategy to win over major theater exhibitors is unknown, but the company certainly has the movies and the intention to get them into theaters.

Representatives for Netflix did not respond to requests for comment for this story.

“They are not the only game in town anymore, by far,” the streaming executive said. “With Amazon as aggressive as it is and Hulu turning their business around, I think a lot more people are going to start looking under the Netflix hood.”