The broadcast networks have made great strides in recent years by diversifying the faces we see on primetime TV, a momentum that carries into new and returning shows on the 2010-11 schedule.

But it’s a scattershot success. At the moment, the number of scripted, live-action shows on broadcast television with all-black (or predominantly minority, for that matter) casts is exactly zero.
If you take into account reality series, "you might actually be able to make the case that there are more African-Americans on broadcast TV than ever before," longtime media agency research guru Steve Sternberg told TheWrap.
Just not all on the same screen. 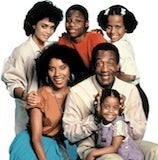 "Black people are starved for shows which not only feature lots of black actors but that put black culture front and center in a way they enjoy," veteran TV critic Eric Deggans of the St. Petersburg (Fla.) Times, told TheWrap.
The irony is in the past three decades, when a lack of minorities on TV was a measurable problem, programs with an African-American focus were in abundance: “The Jeffersons,” “Sanford & Son,” “Good Times,” “The Cosby Show,” “The Fresh Prince of Bel Air,” “A Different World,” “Family Matters,” “Martin,” “Living Single,” "The Hughleys," “The Bernie Mac Show,” “Everybody Hates Chris” … the list goes on and on.
Only NBC’s “Cosby” was a true crossover phenomenon – but each had a measure of success to illustrate that black shows have a place on the networks.
And ad-supported cable doesn’t fare much better, with TBS – which premiered “Are We There Yet (cast photo below, right)” on Wednesday night – standing head and shoulders above everyone in the genre. 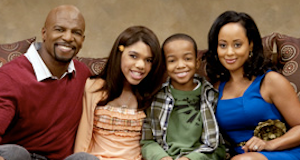 To its credit, Fox put on two new shows with all-black casts last year, the only network to do so. "Brothers," a live-action sitcom, failed in the ratings almost out of the gate and was quickly canceled. The animated "The Cleveland Show," which was renewed on Thursday for a third season just as it finished its first run, has been a success in part because it meshed inside Fox’s Sunday animation block.
The show has averaged a solid 3.1 18-49 rating and 6.3 million viewers per episode, but was helped by its Seth McFarlane pedigree. And even in that show, some of the main voice actors, including the voice for lead character, are not black.
Fox has been able to cash in on "The Cleveland Show" where it couldn’t with "Brothers." in part, because "Cleveland" airs within an animation block and the pieces flow well into and out of each other. “Brothers” did not have as compatible a lead-in or lead-out.
So why not put an all-black sitcom within a white sitcom block?
"They probably don’t think a black-cast comedy would fit in with the audience flow of white-cast comedies, but I’d like to see more black-cast comedies," says Sternberg, who spent years doing show research and analyzing the programming landscape for media agency Magna.
Again, not to single out Fox, it did air "The Bernie Mac Show" for several years when many of the other broadcast networks were not airing any shows with primarily black casts. And Deggans describes "Bernie Mac" as an example of a show "centered on black culture and black familes that was also creatively quite successful."
The now-defunct UPN network also had more than its share of black sitcoms, and several were brought over to the new CW network, which was created when UPN and The WB merged a few years back. But the ethnic sitcoms never jelled with the CW’s other young, female-skewing shows and were eventually dropped.
One of those sitcoms, "The Game," about the personal lives of football players on a ficticious professional team, was recently picked up by BET, which has contracted for more original episodes with primarily the same cast. That will begin running on the cable network this fall.
While the CW has no scripted shows left with black casts or black leads (Tyra Banks does host "America’s Next Top Model" on the network), it is hoping to make its biggest splash  this fall with "Nikita," which stars an Asian-American actress, Maggie Q, who is making her American television debut after becoming an internationally known action movie star in Hong Kong.
(Read also: Maggie Q, the New Face of the CW)
In addition to producing new episodes of "The Game," BET is also partnering with Flavor Unit Entertainment to produce an original scripted black-cast romantic comedy series, "Let’s Stay Together," scheduled to premiere in the first quarter of 2011.
But even BET over the years has been lax in producing original scripted series with all-black casts. The network has run off-network shows in syndication, but these will be the network’s first foray into originally produced shows.

BET senior vice president of original programming Charlie Jordan Brooks says she’s not going to speak for previous management regimes at BET, but said current management is committed to original scripted programming with predominantly black casts going forward.
"There’s clearly a void in this area," she told TheWrap. "There is talent and voices on both sides of the camera that are not being heard."
Brooks says BET is in the process of building its own in-house production team that will be able to produce scripted shows on its own or in conjunction with other studios.
Perhaps the most successful ad-supported network televising an African-American block of shows on television right now is TBS. With the premiere of sitcom "Are We There Yet?" on Wednesdays at 9, the network is currently airing three sitcoms with black casts from 8 p.m.-11 p.m.
With the network smartly leading two episodes of "There Yet?" out of two episodes of Tyler Perry’s "House of Payne" and into two episodes of Perry’s "Meet the Browns," the new show averaged 3.2 million viewers on its opening night.
Michael Wright, executive vice president and head of programming for TBS, TNT and Turner Classic Movies, told TheWrap that programming these shows is "really good, smart business; they reach an audience that is desired by advertisers, and it’s been enormously successful for us. I don’t understand why more networks don’t do it."
And the block runs a little counter to the audience pull that the broadcast networks have seen. While "Meet the Browns" is watched by an audience that is 78 percent black, the "House of Payne" audience is almost evenly divided, with 52 percent blacks watching compared to 48 percent whites.
Wright can’t say why these shows on TBS do so well, but he said, "The cable model might be different, but the ratings for these three shows are as good or better than many shows on the broadcast networks."
Deggans complains that the TBS shows are "creatively disappointing" because the writing is "clichéd" and the situations "unsurprising," but some black viewers who are flocking to those shows would disagree with him, Deggans also faults black viewers for not supporting shows he believes are "vastly superior depictions of black families and black culture," like ABC Family’s "Lincoln Heights" and HBO’s "Treme."
Still Deggans, who is black, believes like Sternberg that this fall’s broadcast lineup, with black leads like NBC dramas "The Event" and "Undercovers," "is going to be a good one for network TV diversity," adding, "About half the new shows NBC is premiering in the fall have people of color as the lead characters, compared to some years when there were only one or none."
Also read:
Hollywood’s White Summer: Where’s the Diversity?
x
Looks like you're enjoying reading