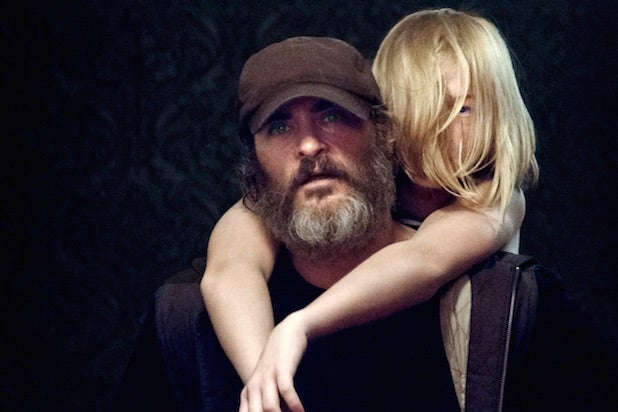 More of a collection of accomplished filmmaking moments than a wholly satisfying film, “You Were Never Really Here” offers an unfamiliar spin on a well-known style.

Adapting Jonathan Ames’ 2013 novella that itself was a sideways riff on the hard-boiled detective genre, writer/director Lynne Ramsay picks up Ames’ slanted approach and moves it even further afield. Instead of subverting hard-boiled structure — where a jaded old-timer accepts a seemingly open and shut case, only to be ensnared in a wider web of corruption — Ramsay readily accepts it, but tells the recognizable tale with terse abstraction.

If you’re trying to make sense of the story, which is both clear-cut and oblique, you’re missing the point. It doesn’t matter that hired muscle Joe (Joaquin Phoenix, in leonine bearded majesty) uncovers a wider ring of corruption and pedophilia when rescuing a politician’s missing daughter. What matters is that he is mentally and physically scarred and has a debilitating case of PTSD forged from a childhood of abuse and a career witnessing horrors in the military and FBI.

Also Read: Spike Lee on His Trump Fears: 'I Wake Up Every Day Thinking He Has the Nuclear Football'

His trauma frames his every waking moment. It makes no difference if Joe is in a drug den or diner, he lives each instant with the same twinging unease. Thus, so too will the viewer. As the narrative moves through the familiar film noir motions, craft effectively blurs them out. To this end, Ramsay is greatly assisted by Radiohead guitarist Jonny Greenwood’s warping, nervous score and editor Joe Bini’s jaggedly discordant rhythm.

Ramsay will often find a number of unfamiliar notes to play in a series of otherwise set-ups. In one standout sequence, after Joe realizes that a man he shot is not yet dead, he offers the expiring man a painkiller, and then gets alongside his victim on the ground. The two men then quietly listen to the pop music playing on the radio while one of them bleeds his life away.

Though such notes of grace make “You Were Never Really Here” stand out, they are few and far between in this otherwise grimly violent and willfully oblique film. When the press screening ended, one part of the audience was roused to cheers, another stood to boo and another not insignificant subset quietly shuffled out the theater unclear just what they had been witness to.

Moreover, whatever they had witnessed might not necessarily be what you will. The film was the last of the 19 main-competition titles to screen in Cannes. Ramsay only delivered this edit the day before yesterday, and the lack of end credits would indicate that there is still work left to do. Amazon Studios owns the rights but have yet to announce a release date. Chances are they will release a slightly different version than the one screened in Cannes.