The new producers of the Oscar show have been praised by the Academy, scrutinized by the press, and analyzed for what they might bring to the show.

But what do the people who are going to be working for Bill Mechanic and Adam Shankman think?

Producers come and go, after all. The Oscar crew, for the most part, sticks around year after year. From top staff like associate producer Michael Seligman and executive in charge of talent Danette Herman – both of whom have more than 30 years of experience – to associate directors, stage managers and stagehands, it’s not unusual for Oscar staffers to have spent 10, 15, 20 years or more working on the show.

Which means that yes, Adam, there will likely be people working for you who also worked on the Oscar show where you played a bare-chested pirate dancing to the strains of “Under the Sea.” (Or were you one of those flipper-wearing frogmen instead?) 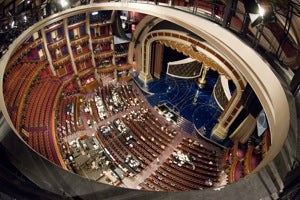 When they’re not doing the Oscars, the team handles other awards shows, talk shows and reality shows such as “American Idol.” Every year before their Oscar duties begin in earnest, for instance, Seligman and Herman handle the Kennedy Center Honors. And any time there’s an important live event on television, from the Super Bowl halftime show to Barack Obama’s inaugural celebration, vets of the Oscar show are there to make sure the director gets his shots and the stars hit their marks.

They view the Oscar show, and Oscar producers, from a unique perspective. The last show’s producers, Bill Condon and Laurence Mark, for instance, won mostly rave reviews for their show from critics and Academy members – but they were less embraced by the crew, some of whom found the show to be a production nightmare and the producers unapproachable to the point of aloofness.

I reached out to several crew members yesterday to ask their (anonymous, of course) impressions of the new Oscar producers. I got some common responses, beginning with this one:

“Bill Mechanic? Never heard of him.”

Understand, these are not executive-level staffers like Seligman and Herman; these are below-the-line workers who, for the most part, don’t read the trades or pay attention to who’s ensconced in the corner suites at the studios. Without experience in live television, Mechanic has eluded them.

As for Shankman, some crossed paths with him during his days as a judge on “So You Think You Can Dance,” or his occasional input on awards shows (he put together a tribute to Adam Sandler at the MTV Movie Awards a few years back), or even the 1990 Oscar show where he was one of Paula Abdul’s dancers.

If you were to write a Zagat-style entry for Shankman, assembling a review from people’s comments, it’d look something like this:

“Although he’s ‘very hyper,’ Adam Shankman is ‘creative and a good director’ who ‘seems like a very nice guy’ to work with. His lack of ‘live TV experience’ may be a drawback, though, with some commenting, ‘This is a new animal to him in every way.’”

The most common assessment of what’s ahead for television’s biggest live entertainment show, now that it’s being masterminded by a producing team without live television experience, was succinct and guarded:

“It should be interesting.”