“Benedetta” is one of the new titles making its North American premiere at NYFF, as well as two films by South Korea’s Hong Sangsoo including “Introduction” and “In Front Of Your Face.” Sangsoo is making his 16th and 17th appearance at the festival with his two films. Other North American premieres include Joanna Hogg’s “The Souvenir Part II,” “What Do We See When We Look at the Sky?” from director Alexandre Koberidze.

They join the previously announced world premiere of “The Tragedy of Macbeth” as the opening night film, Jane Campion’s “The Power of the Dog” as the centerpiece and the North American premiere of “Parallel Mothers” from Pedro Almodóvar as the closing night film. 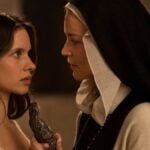 NYFF 59 will run from Sept. 29 through Oct. 10 and will be a hybrid of in-person screenings along with select outdoor and virtual events.

The film festival is also requiring all staff, audiences and filmmakers to be vaccinated at any NYFF venues during the festival.

“Taken together, the movies in this year’s Main Slate are a reminder of cinema’s world-making possibilities,” Dennis Lim, NYFF director of programming and chair of the Main Slate selection committee, said in a statement. “They open up new ways of seeing and feeling and thinking, and whether or not they refer to our uncertain present, they help us make sense of our moment. I’m in awe of the sheer range of voices, styles, ideas, and images contained in this lineup, which includes many returning filmmakers but also more new names than we’ve had in some time, and I’m eager to welcome audiences back to our cinemas to experience these films as live, communal events.”

See the full lineup for the 2021 New York Film Festival below:

“The Tragedy of Macbeth“

“The Power of the Dog“

“The Girl and the Spider“

“In Front of Your Face”

“Prayers for the Stolen“

“What Do We See When We Look at the Sky”

“Wheel of Fortune and Fantasy“

“The Worst Person in the World“