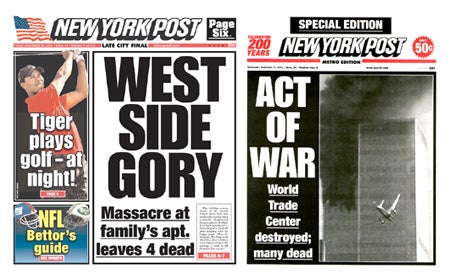 But unlike 9/11, it seems the New York Post thinks its readers are immune to Tiger fatigue.

So what new wrinkle in Tigerland landed him on the cover this time? A report that he’s been watching cartoons and eating cereal. (When exactly did Tiger turn into Seinfeld?)

Elsewhere, the Wall Street Journal had three of its reporters dig into a story that had already been reported by the New York Post nearly two weeks ago: that the Woods camp cut a deal with the National Enquirer not to publish photos of Woods’ “transgressions” in exchange for a rare interview that ran in Men’s Health, a magazine that, like the Enquirer, is owned by American Media. (The Journal fails to give the Post credit for its scoop — which is odd, considering they’re both owned by News Corp.!)

And, as my colleague Joe Adalian notes on TV MoJoe, a “Dateline” exposé on Woods (“The Secret Life of Tiger Woods”) is getting recut for an hourlong show on TLC of all places, replete with “with all new bimbo eruptions.”